Departures – our podcast exploring 400 years of emigration from Britain 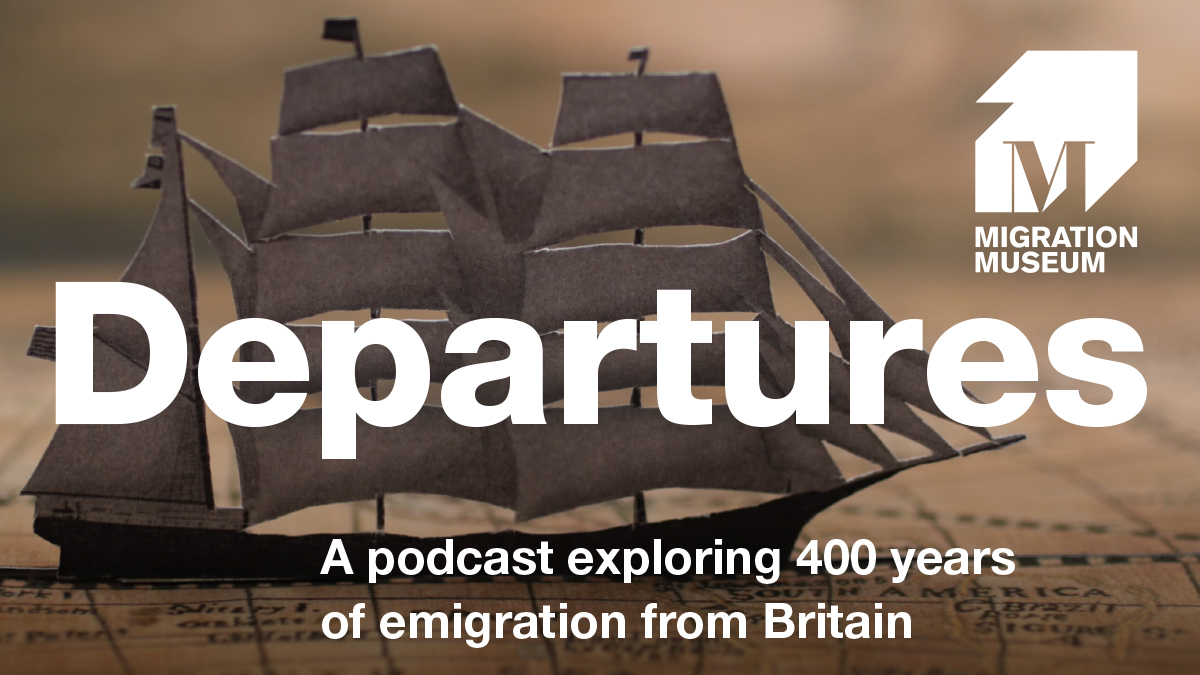 What would it take for you to leave your home? To leave everything and everyone you know to move to another country and start again. Over the past 400 years, that’s exactly what millions of British people have been doing. Today, the news headlines are full of stories of migrants trying to come to Britain. But for most of this country’s history, it’s actually been the other way round. And Britain’s emigration rate remains one of the highest in the world. Why has such a small island nation produced so many migrants and how have they shaped the world we live in today? In our new podcast series, Mukti Jain Campion speaks to people who are shedding new light on this often hidden history.

Listen and subscribe to Departures on Spotify, Apple Podcasts, Google Podcasts or wherever you get your podcasts by searching for ‘Departures 400 Years of Emigration’.

This podcast accompanies the Migration Museum’s exhibition Departures: 400 Years of Emigration from Britain.

Britain continues to be a major source of emigrants in the 21st century – not something we often hear about. So why do people leave the UK now and which countries do they choose to settle in? And how is emigration today affected by Britain’s colonial past?

Britain is unique in its long history of exporting its own children. In the early 17th century poor children were often rounded up on the streets of London and put on ships to the new American colonies. Well into the 20th century there were official government schemes sending young children out to settle in former colonies such as Canada and Australia with the promise of a better life. While some children were fortunate enough to do well in their new country, for thousands of others the forced migration was a profoundly traumatic experience of family separation, neglect and abuse.

Mukti Jain Campion hears from two former child migrants who were sent to Australia in the early 1950s without their parents’ consent. She also speaks to Margaret Humphreys, founder and director of the Child Migrants Trust which was established to support former British child migrants reunite with their families and asks what lessons can be learned from their experience?

Episode 7: The Left Behind Wives of Cornwall

When we speak of emigration we tend to think of the people who leave to go abroad. But what about the families and communities left at home?

In 19th century Cornwall this was a pressing question. As the once-thriving local mining industry went into decline, thousands of men left each year to find better paid jobs abroad. They were often gone for years, leaving wives and families to cope alone and rely on remittances that didn’t always come. It was an experience shared by thousands of Cornish families over several generations.

Mukti Jain Campion speaks to Dr Lesley Trotter author of The Married Widows of Cornwall to find out how these so-called “left behind” wives survived and why their stories are so important to understand the full story of migration. Amanda Drake also shares a poignant letter sent by her 19th century ancestor which gives a glimpse of the heartbreak and struggle that many such wives had to endure.

Episode 6: A Welsh Utopia in Patagonia

In May 1865, 153 men, women and children set sail from Liverpool to travel to the other side of the world.  Their dream was to build a new homeland, somewhere they could speak Welsh, govern themselves and pursue their religion and culture without interference. A romantic vision that took them 8,000 miles to the remote Chubut valley in Argentina.  So did their dream of a Welsh utopia come true? And what impact did their arrival have on indigenous people who already called this region home?

Mukti Jain Campion speaks to Professor Lucy Taylor of Aberystwyth University who has studied the archives of the Welsh in Patagonia, and Gareth Jenkins who has traced a family from his own village in Montgomeryshire that was amongst the early migrants.

Episode 5: The Leaving of Liverpool

Imagine you could go anywhere in the world – no passport needed. All around you there are posters and pamphlets extolling the virtues of emigration and offering incentives to ease your passage to settle in distant sun-kissed lands. Would you be tempted? From the early 19th century to the beginning of the First World War, it’s estimated that over 10 million British people chose to migrate. Most went to settle in the United States and around Britain’s growing empire. Over half of these emigrants left from the port of Liverpool.

Mukti Jain Campion talks to Ian Murphy, Director of the Merseyside Maritime Museum, to discover how the port of Liverpool became the gateway to millions of new lives abroad, and examines the importance of printed propaganda in fuelling 19th century British emigration with Dr Fariha Shaikh, Lecturer in Victorian Literature at the University of Birmingham and author of Nineteenth-Century Settler Emigration in British Literature and Art.

The 17th century colonisation of North America and the Caribbean by emigrants from the British Isles was, almost from its beginning, dependent on the brutal forced transatlantic migration of millions of enslaved African people. Their labour made possible the industrial-scale production of lucrative crops such as tobacco, sugar and cotton which created the wealth, not just of individual British plantation owners, but of much of the wider British economy. Much of this history has remained hidden and only very recently have serious attempts begun to investigate and acknowledge the role that slavery played in Britain’s wealth, power and influence. But what if those investigations lead to your own front door and start to shatter your family myths?

Mukti Jain Campion explores this dark strand of British emigration history with Professor Matthew Smith, Director of the Centre for the Study of the Legacies of British Slave-Ownership at University College London; Madge Dresser, Honorary Professor of History, Bristol University and author of Slavery Obscured; Oliver Colegrave and his father Stephen Colegrave, co-founder of the Byline Times; and Sally Hadden, Associate Professor of History, Western Michigan University and author of Slave Patrols: Law and Violence in Virginia and the Carolinas.

Episode 3: The Company Men in India

Since the 1960s, large numbers of people have come to Britain from the Indian subcontinent. But for the preceding 350 years almost all migration was in the other direction. From the beginning of the 17th century when the first ships of the English East India Company set sail from London, India was seen as a place of fabulous wealth where huge fortunes could be made. As the Company’s trading posts around India flourished and the Company gained ever more political control, competition for Company jobs became intense. Tens of thousands of men from Britain ventured out to live an expat life in a country that was completely different to anything they had previously known. Most never returned.

Mukti Jain Campion speaks to historians William Dalrymple, Professor Rudrangshu Mukherjee, Dr Kate Teltscher and to Gurminder Bhambra, Professor of Postcolonial and Decolonial Studies at the University of Sussex, to find out more about the Company men who went to India and how their actions brought profound change for both Britain and India.

Women are largely hidden from the history of early English emigration. But if you look hard enough you can sometimes catch glimpses of their stories in the archives. For example, in the early 17th century shiploads of young women were despatched to America by the Virginia Company of London.  It was hoped they would marry the English planters in Jamestown and help grow the new colony.

But who were these young women prepared to travel thousands of miles across the ocean in search of a husband? And how did they fare? Mukti Jain Campion talks to Jennifer Potter, author of The Jamestown Brides: The Bartered Wives of the New World.

Episode 1: The Swarming of the English

Mass emigration from England first took off in the 17th century with the colonisation of America and the Caribbean. The number of people leaving the shores of England was huge and unprecedented.

Mukti Jain Campion speaks to historian James Evans, author of Emigrants: Why the English Sailed to the New World and to American historian Dr Linford Fisher to find out how those early English settlers fared and how Native Americans responded to the incursion of their lands.

Departures is a Culture Wise Production for the Migration Museum