Who was Mrs Fouracre?

Dr Lesley Trotter contributed to our Departures exhibition and features in the latest episode of our Departures podcast, which focuses on the so-called ‘left behind’ wives of Cornwall in the 19th century. The episode page features Henry Scott Tuke’s painting ‘The Message.’ Dr Trotter chose a study for this painting as the cover image for her book ‘The Married Widows of Cornwall’.

In this guest post, Dr Trotter reveals the fascinating real-life story of the woman featured in the painting: Mrs Elizabeth Fouracre. 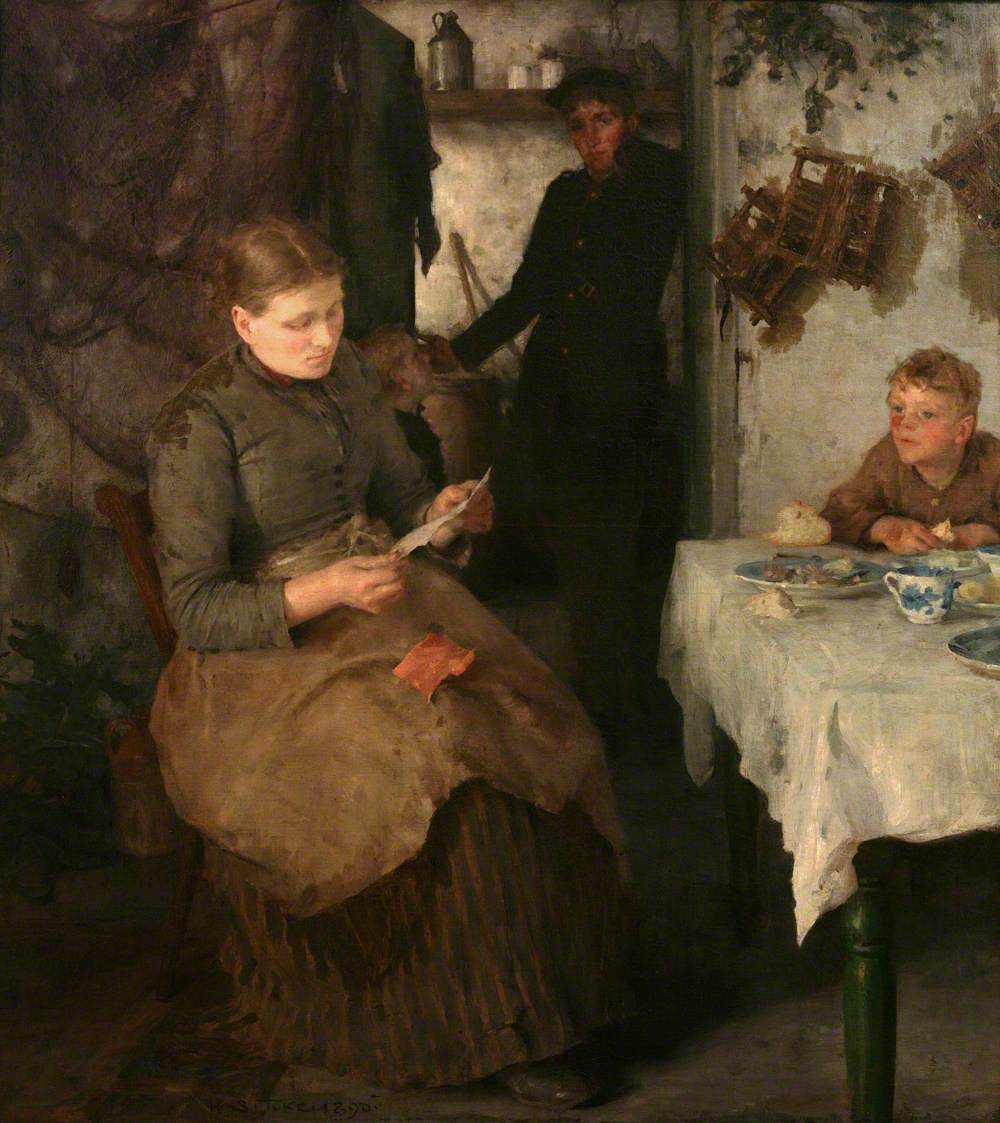 I came across Henry Scott Tuke’s painting ‘The Message’ early in my research on the Cornish wives ‘left behind’, and I always thought that the scene of a mother with young children seeming to pause in her daily activities to sit and read a letter that had just arrived must have been a familiar occurrence in the homes of the women I was interested in. The mother’s enigmatic expression gives little clue as to what the letter says – is it good news, or bad? What are the implications for her and her children? For me, this comes across even more in the preparatory study that Tuke produced, which captures his model for the mother with untidy hair and a duller complexion. It was this image that I chose for the cover of The Married Widows of Cornwall.

Tuke’s model in this case was his housekeeper, Mrs Elizabeth Fouracre. Throughout my book I was determined to put women’s stories centre stage, so it didn’t feel right that the identifiable woman on the cover should remain defined simply as Mr Fouracre’s wife and Tuke’s housekeeper. What was her story? Who was Mrs Fouracre?

The girl who was to become Tuke’s housekeeper was Elizabeth Jane Vandersluys born 1857 in Perranzabuloe on the north coast of Cornwall. Her great grandfather was Lambertus Vandersluys, a dancing master of Dutch descent who lived in Lostwithiel. When Lambertus died in 1791 the authorities there did everything they could to have his widow Peggy and her children (including Elizabeth’s grandfather, George, then aged 2) removed to another parish. George eventually settled and raised a family in St Clements near Truro where he was parish clerk for many years. Elizabeth’s father James Richard Vandersluys was the only child of George’s second marriage and was born in 1838, just a year before George died.

In 1857 James Richard Vandersluys, a 19-year-old tin miner, married Elizabeth Inch from Perranzabuloe. Elizabeth Jane, their first child, was born there later that year and was followed by Eliza in 1859, Ellen (1862) and William George (1865).

In 1881 Elizabeth Jane was 23 and employed as a domestic servant in Ferris Town, Truro, but the following year she returned to Perranzabuloe for her marriage to George Fouracre, a railway packer. It might have been George’s work on the railway that brought the couple to Falmouth, we don’t know, but in 1885 they were living in a house that had been built for the manager of the, by then disused, arsenic works on the cliffs between Swanpool and Pennance Point. The Fouracres shared the house, Pennance Cottage, with the Andrews family, and it was Elizabeth and Mrs Andrews that Henry Scott Tuke approached that summer to see if he could rent a couple of rooms in the house overlooking the bay.

The two women soon found themselves modelling for Tuke, and his painting A Morning Gossip pictures them chatting over the garden fence. By this time Elizabeth was a mother and Tuke shows her holding her baby son Richard. Richard (born 1884) and especially his older brother George (born 1883) were to become regular models for Tuke’s work. As a 17-year-old, George’s occupation in the 1901 census is given as ‘artist’s model’. 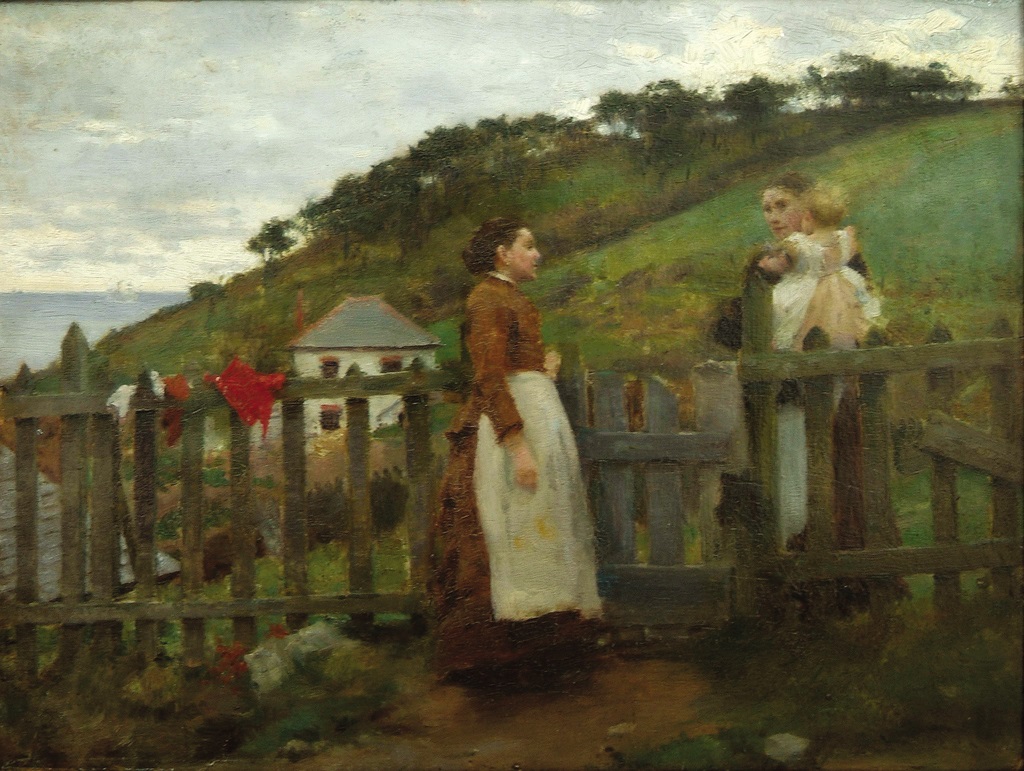 That Tuke painted Elizabeth and Mrs Andrews literally on opposite sides of the fence in A Morning Gossip may be more than coincidence because it appears there were frequent arguments and disturbances in the house resulting in the dismayed Tuke spending most of his time on his boat. By June 1886 the Andrews had left, and Elizabeth and her family also appear to have moved elsewhere, because Tuke took over the house, installing the Jewell family as housekeepers. However, Mrs Jewell proved bad-tempered and prone to rows, and within months he was delighted to have Elizabeth and her family move back in, writing: “Perhaps the beef in the pie will not be rolled quite so nicely but it will be quite good enough, and besides having home-made bread I shall feel as if I had a home to go to, which I never did when the black Jewell, as Mother calls her, was here.”

Tuke clearly had great respect and affection for Elizabeth Fouracre, who was to become his devoted housekeeper for over 30 years. His references to her suggest a strong personality, and it has been suggested that although they were of a similar age, Elizabeth was a motherly figure to him. When photos were taken to illustrate an interview with Tuke to be published in the Windsor Magazine he insisted that no photo of his home would be complete without her.

Tuke was less fond of Elizabeth’s husband George, and there are hints of a drink problem. In the early hours of 30th August 1903 there was a major row and Tuke ejected him, he hoped, from the house for good. However, the 1911 census shows George back living with Elizabeth at the cottage.

In the 1890s, in addition to The Message, Elizabeth featured in two other Tuke works. In Picking Carnations and a sketch called Lady looking out to sea she is pictured in the garden of Pennance Cottage against a backdrop of the bay. In all of these works Elizabeth has an air of thoughtfulness about her. Did she resent the interruption to her busy household work, or was it a precious opportunity for stillness and reflection? One wonders what she might have been thinking about as she held these poses. The 1911 census provides a possible clue as it reveals that Georgie and Richard were not her only children – she had lost four others: Elizabeth Jane at 8 months old in 1886; Albert John at 9 months in 1888, William John at 5 months in 1889, and another as yet unidentified.

When Elizabeth posed reading the letter in The Message, was she recalling letters she had received from family members abroad, like the wives featured in my book? Because as it turns out Elizabeth was all too familiar with the experience of wives being left behind by emigrating miners. In 1884 her own father, James, set sail for the mines of America accompanied by his two sons-in-law. Their wives: Elizabeth’s mother and her two sisters, Ellen and Eliza, neither of whom had been married for much more than a year, remained in Cornwall. Elizabeth’s sisters were reunited with their husbands, but her father, James Vandersluys, was killed in a mining accident in Michigan in 1887. Tragedy was to strike the family again in 1909 when Elizabeth’s 4-year-old granddaughter Lily (Richard’s child) died from burns after playing with matches.

So while Elizabeth was keeping a much-treasured home for Tuke in Cornwall, baking beef pies and making bread, she was also coping with multiple pregnancies and a series of heartbreaking family losses. Her resilience in the face of what life threw at her make hers a far more fitting image for the cover of my book than I could ever have imagined when I chose the picture.

Listen to Departures podcast episode 7: The Left Behind Wives of Cornwall

Find out more about our Departures exhibition

Dr Lesley Trotter is a social historian, genealogist and writer with a special interest in combining family history and academic research techniques to reveal the hidden stories of the past. Her PhD in Cornish Studies at the University of Exeter focused on the experiences of wives ‘left behind’ by emigrating Cornish miners in the 19th century, now published as The Married Widows of Cornwall. More information can be found on her website: www.humblehistory.com.

A Morning Gossip, The Message and Study for The Message – Mrs Fouracre are part of the Tuke collection at Falmouth Art Gallery.

This article was originally published on Dr Trotter’s Humble History blog. We are republishing the post with Dr Trotter’s permission. All text © Dr Lesley Trotter.