Our 2017 exhibition No Turning Back identified seven migration moments that changed Britain. The exhibition’s final ‘moment’ was the 2011 Census. This showed a marked increase in the number of people identifying as ‘mixed’, and looked forward to what the 2021 Census might reveal.

Last week, we found out. The 2021 census showed a further 40% increase in the number of people identifying as being from ‘mixed/multiple ethnic groups’ since 2011. It paints a fascinating portrait of how Britain – and its mixed-race population – is continuing to evolve.

In this guest blog post, author Lucas Fothergill explores Britain’s mixed-race history, what the latest Census results reveal – and the significance of this moment.

Lucas is currently writing ‘Everyone Everywhere’, a book about mixed-race Britain, which is being crowdfunded with Unbound, the same publishing house that released ‘The Good Immigrant’.

If you enjoy this blog post and would like to read more in-depth research, interviews and stories, please consider supporting the crowdfunding campaign. 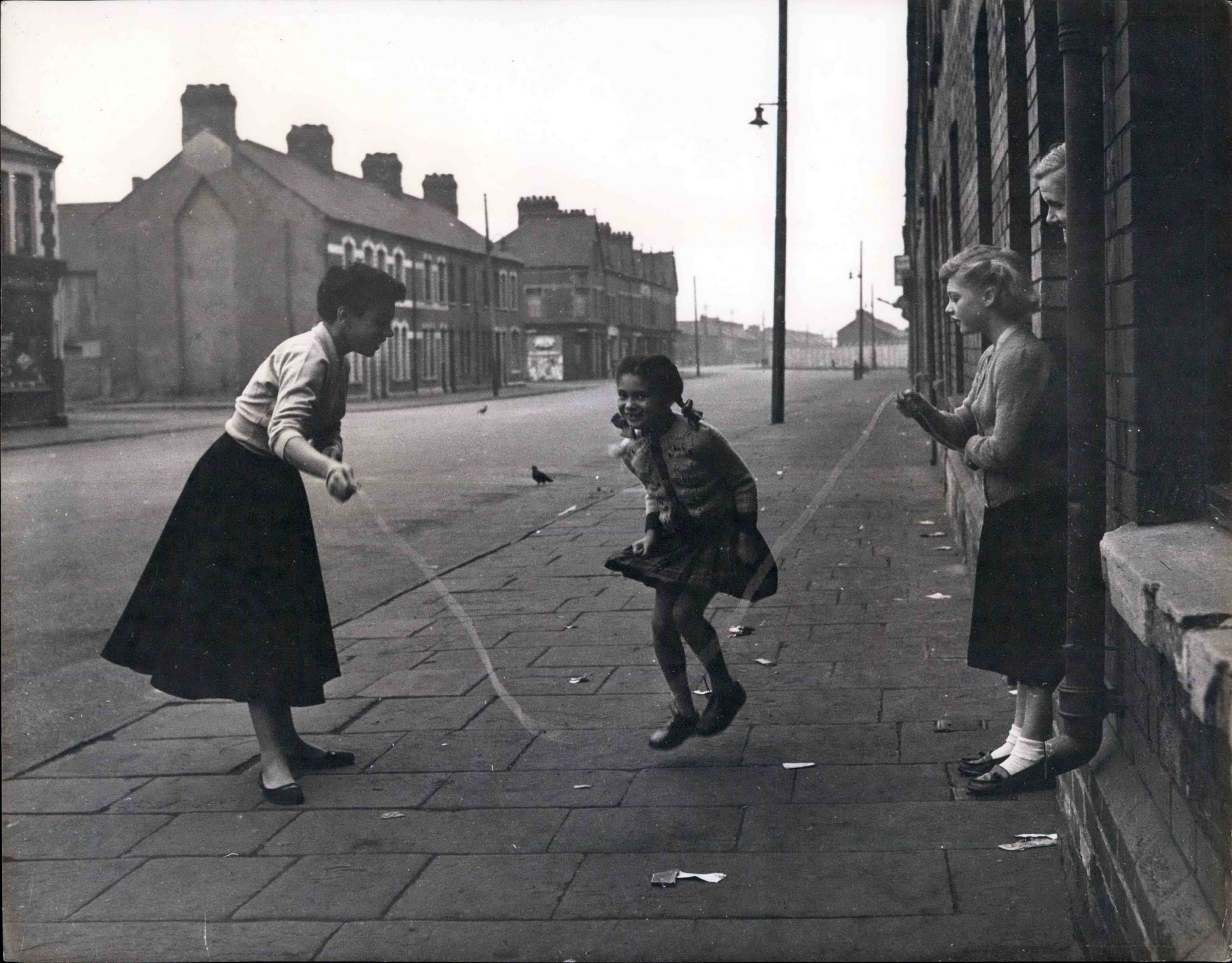 Singer Shirley Bassey and her sister play in the streets of Tiger Bay, Cardiff, where they grew up (ZUMA Press, Inc. / Alamy Stock Photo)

“Someone must have the courage to strike a warning note.”

His feet pound the stoney streets. Mist looms over Cardiff. Children of all backgrounds laugh and play nearby. The warm “smell of curry and rice”, as one local described it, greets them. It’s the 1920s, and Police Chief Constable James Wilson is on the verge of entering the history books.

Wilson was “concerned by Tiger Bay’s reputation for immorality and mixed-race marriages”, so wrote to his local police committee. “Half-caste children had a vicious hereditary taint of their parents,” he said, as reported by the BBC documentary ‘Mixed Britannia’.

“The time may come,” he continued, “when public opinion will awaken to the fact that our race has become leavened with the coloured strain. Someone must have the courage to strike a warning note.”

In 1929, Wilson called for a new form of social control. He was an advocate for the sort of laws used in South Africa, which would ban sexual contact between races. The issue erupted in the press, with some journalists supporting Wilson’s move. It was a menacing attack on the mixed community in Tiger Bay.

In the early twentieth century, mixed-race communities had emerged in seaports around Britain, like in Cardiff’s Tiger Bay. Seamen of all races and backgrounds, many British citizens themselves, had come from across the empire to live and work in these ports. The British empire was multicultural – and so it helped make Britain itself multicultural in turn. As the Sri Lankan writer Ambalavaner Sivanandan put it: “We are here because you were there”.

When the seamen arrived and worked, some of them fell in love. Thousands of mixed-race children were born from South Shields to Glasgow, Liverpool to London. But no community was as proudly mixed as Cardiff’s Tiger Bay, or Butetown, as it was also known. It’s a place where the whole community of different races would come out to celebrate Eid together. Quite a beautiful image, you might think… unless you were called ‘James Wilson’ – who wanted to go to battle.

But then Wilson’s direction of travel suddenly, violently veered off. World War Two erupted, and he was drafted into a different kind of battle than he had anticipated.

Fast forward a few years, and Wilson was back in Cardiff. He had survived. Been knighted, even. And when he returned home, the mixed Tiger Bay community was still there. Was the battle about to resume?

But something curious happened next. After witnessing the atrocities committed by the Nazis, Wilson had a change of heart. As he looked around Tiger Bay, Wilson approved. He no longer wanted mixed relationships stopped or Tiger Bay’s community disbanded. Now Wilson saw it as something to aspire to, a shining example of tolerance. His campaign to bring in British miscegenation laws was over.

Years later, another surprise came. A member of the Wilson family married a mixed-race person, making him a part of the very kind of family he once sought to destroy.

It’s important to discuss communities like Tiger Bay, and the historical threat they faced. Britain rarely has a narrative in the public domain about mixed-race history. With the latest census releasing, could now be the time to start one?

The census is an endlessly fascinating freeze-frame of Britain at this moment. For years, as David Olusoga says, we live in the dark before the census releases and “somebody turns on the light”. Reading the census is like Saruman looking into the Palantír, as David Olusoga does not say, but instead of seeing what those hairy little hobbits are up to, you get to learn about who actually lives in Britain.

Ethnicity statistics for England and Wales from the 2021 Census are now available. They show dramatic shifts in the population. The headline; 1.7 million in the two nations identify as mixed-race. That’s a tripling since 2001.  When Scotland and Northern Ireland’s data comes out soon, this number will rise further.

Let’s dig a little deeper into the numbers. ‘White and Black Caribbean’ people remained the largest ‘Mixed’ population group – 513,042 people identified as such, up 20% from the 2011 Census. But other Mixed groups saw faster growth. The number of people identifying as ‘White and Asian’ rose 43% to 488,225; ‘White and Black African’ rose 50% to 249,596.  ‘Other Mixed or Multiple Ethnic Groups’ showed the fastest growth: up 61% to 467,113. This underlines that England and Wales’ mixed population is becoming increasingly diverse. 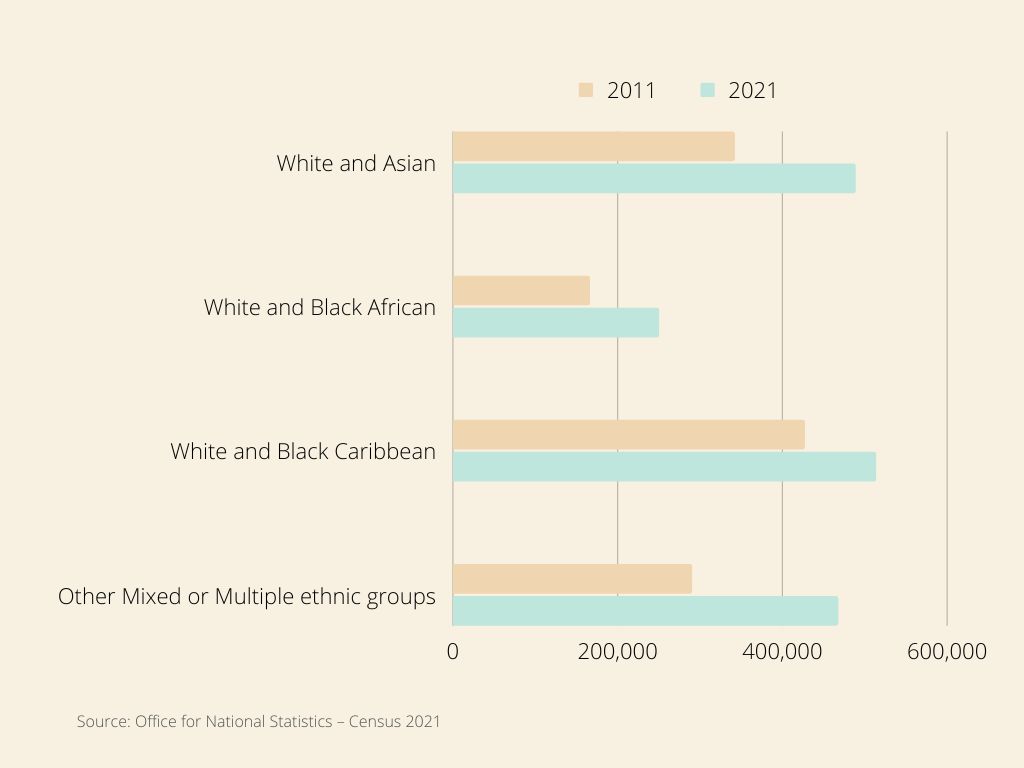 While Cardiff and other port cities were home to Britain’s first mixed communities, London is now the centre of our mixed population. In the Migration Museum’s home borough of Lewisham, 24,253, or 8.2% of the population, identified as Mixed. This is the largest proportion in any area in England and Wales. Indeed, the top 10 areas with the largest proportion of mixed-race populations are all in London. 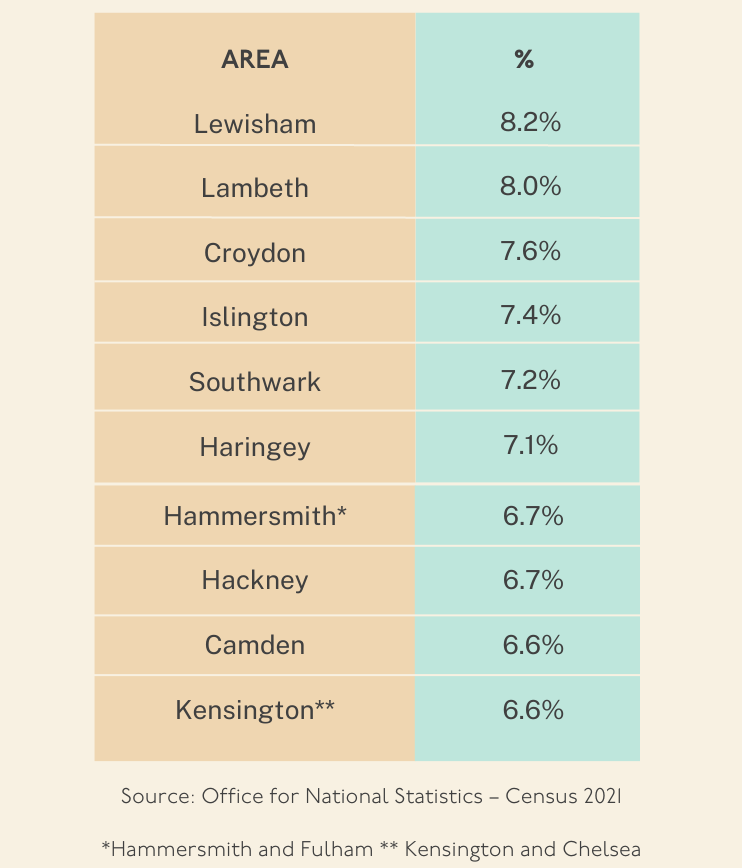 Areas with highest % of Mixed/Multiple ethnic groups population outside London 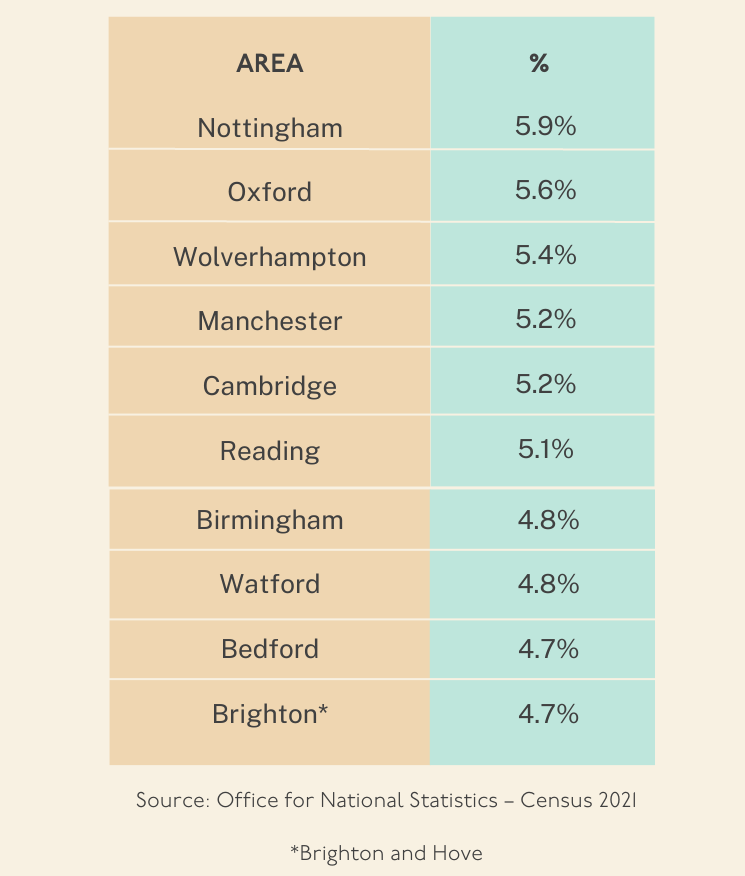 The pace at which the people who live in Britain are changing is extraordinary. It matters – especially if you root this moment back in our history. 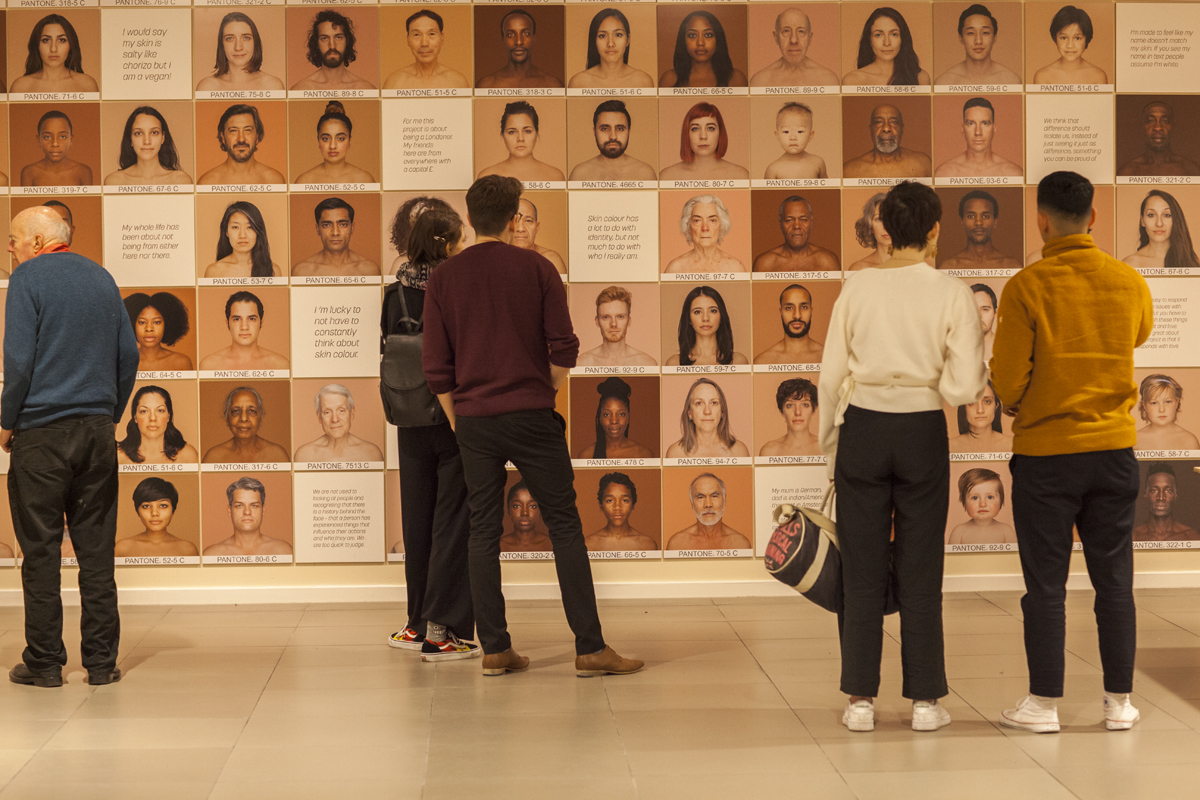 Look at the story of Tiger Bay and James Wilson, and then at the latest census stats. I believe it shows a nation transformed.

As Chamion Caballero and Peter Aspinall show, this is a country whose government used to discourage and separate mixed-race families. But the fate and fortunes of mixed-race people in Britain has reshaped since those early seaport communities.

How has this happened?

Mixed-race history matters, yet is rarely told. It’s a story about one of the fastest-growing groups of people in the UK, yet we rarely hear from them together. It’s time to change that. 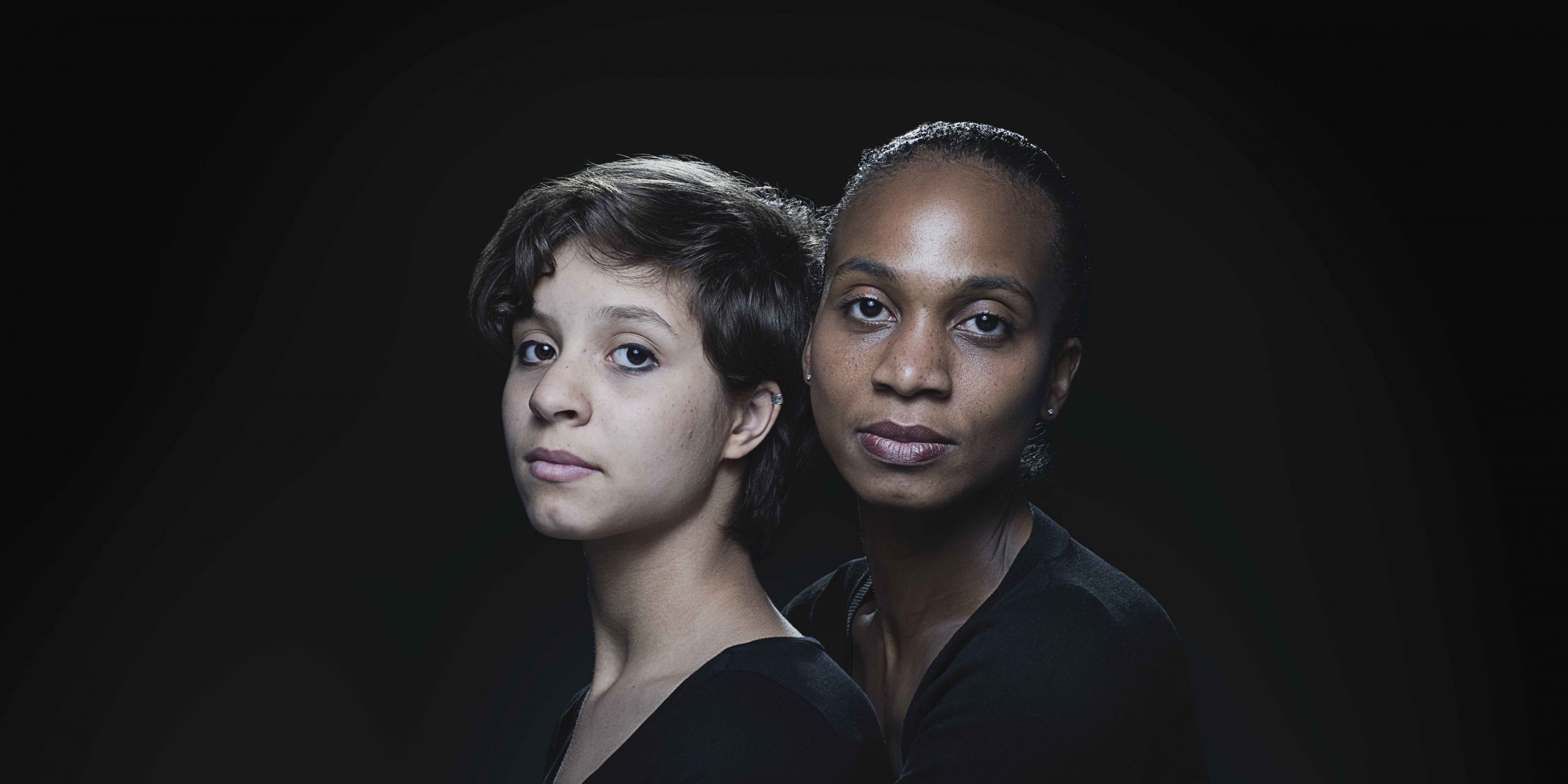 Emilia and Laverne, from ‘Mixed’ by Andy Barter, as featured in our 2017 exhibition No Turning Back: Seven Migration Moments that Changed Britain

My book, ‘Everyone Everywhere’, will help do so. Using interviews and archive material, this book will tell the electric and emotional story of mixed-race Britain. All ages and backgrounds are featured, with fascinating stories to share.

As the book moves through each family story one by one, it will also share mixed-race history with you. It will be entertaining and educational. And while the stories can be challenging, the book will have a focus on joy and humour. Throughout history, we haven’t been able to share this side of our identities and lives enough.

‘Everyone Everywhere’ is being published by Unbound, who also released ‘The Good Immigrant’. They use a crowdfunding element to pay for production costs. So if you’d like to support the book and help make it a reality, please consider pledging here.

Lucas Fothergill is a British-Sri Lankan with a decade of storytelling experience across documentaries, podcasts, and written journalism.

Despite his IMDb page claiming that he’s never lost possession of a football, or that he’s 7ft tall, Lucas adores *true* stories that tell us something larger about ourselves. Lucas has developed and helped produce documentaries for Netflix, BBC, Channel 4, and Channel 5; helped produce podcasts for VICE, and has published journalism in The Independent, VICE & NME Magazine.

Prior to working full-time, Lucas studied English Literature with Creative Writing at Newcastle University. Today, he lives in London with his partner, where they enjoy as many lip-burning bowls of laksa as possible.

‘Everyone Everywhere: Mixed-Race Family Stories’ is his first book.