In April we welcome a new artist in residence to Room to Breathe: the multimedia artist Shorsh Saleh. Shorsh’s display in the art studio inside the exhibition reveals a range of delightful artistic practices, from miniature paintings, installations to carpet weaving. His body of work reflects his layered and complex identity both as an individual and as an artist. Coming from Iraqi Kurdistan, Shorsh found his life intrinsically entwined, first and foremost, with the geopolitics of his land and the collective resistance struggle of Kurdish people in Iraq. Armed conflict, persecution, displacement and migration are all part of his lived experience.

As with previous artists in residence we are going to discover more about Shorsh Saleh’s artistic practices and their relation to migration with a series of questions and answers. In the final questions we ask Dima Karout, curator-in-residence of the art studio, and two other artists in residence for their reflections on Shorsh’s work.

Assunta Nicolini (AN): Shorsh, welcome to the art studio inside Room to Breathe. As an artist who is Kurdish and migrant – how do you express and reconcile the complexity of multiple identifiers?

AN: Your journey as artist starts at home, by which I mean not only the Middle East and Iraqi Kurdistan but also your family. Could you tell us about your early artistic formative years?

SS: There was no formal art education during my school years but I come from an educated family and I was introduced to art at an early age by my older brother. I continued to educate myself through books, teaching myself weaving, carving, painting and drawing. I also taught myself philosophy, art history and art theory. I participated in many exhibitions in Kurdistan before coming to the UK.

AN: Your experience of arrival and settlement in the UK is shaped both by a lengthy, bureaucratic process to gain refugee status (eight years in total) and by accessing educational institutions where you could develop and expand your art techniques. How would you describe such an experience?

SS: The experience of waiting for eight years for my asylum case to be granted was very challenging. During that time I continued to develop my art and I worked as a volunteer, leading art workshops for refugees.

Once my asylum status was accepted, I began an MA in Traditional Arts at the Prince’s School of Traditional Arts in London. The MA involved learning twelve techniques of traditional art such as geometry, icon painting, stained glass, ceramics, miniature painting, gilding, wood parquetry, etc. I focused on carpet weaving and design for my final degree show and was lucky enough to sell my degree-show carpet to HRH Prince Charles, and it is now at Balmoral Castle. I now teach at the school.

AN: Miniature paintings and carpet weaving are two of your principal art forms. Why do you particularly connect with these? And how do you expect to connect to the public through these?

SS: In the Middle East carpets have always been seen as the highest of art forms. Miniature painting is also imbedded in Middle Eastern culture, having originated in Iraq and Iran as a form of decoration to illustrate texts. Both carpet weaving and miniature painting are ancient forms of communication and artistic expression which are widely appreciated in both the Middle East and the Western world. I often use carpet motifs in my miniature paintings to express my identity through my own language and to connect and communicate with viewers, both Middle Eastern and Western. My works combine these traditional techniques with contemporary issues relating to migration, identity and Kurdish politics.

AN: What are you expecting from your residency at the Migration Museum?

SS: I hope to give visitors to the museum an insight into my working practices and culture. I look forward to sharing and discussing my work with the public and to creating some new work.

AN: Dima, as curator in residence of the art studio inside Room to Breathe, what reflections could you offer on Shorsh Saleh’s work?

Dima Karout: I have a great admiration for Shorsh’s work and his ability to transform fragments of his unique journey into pieces of art that brilliantly communicate intimacy, fragility and resilience.

I first read Shorsh’s portfolio and was immediately moved by his talent and his courage. Through his art and the subjects he reflects on, I sensed a human who was able to transform the ugliness of conflicts into engaging and communicative art. I discovered an artist who creates using various mediums and who can easily navigate his hands and mind between traditional skills and modern design. And later, I met him. And it is hard not to be impressed how an artist like him was able to express through his work the difficult path and different struggles that emerge from forced displacement and the long quest for safety and a place to call home. 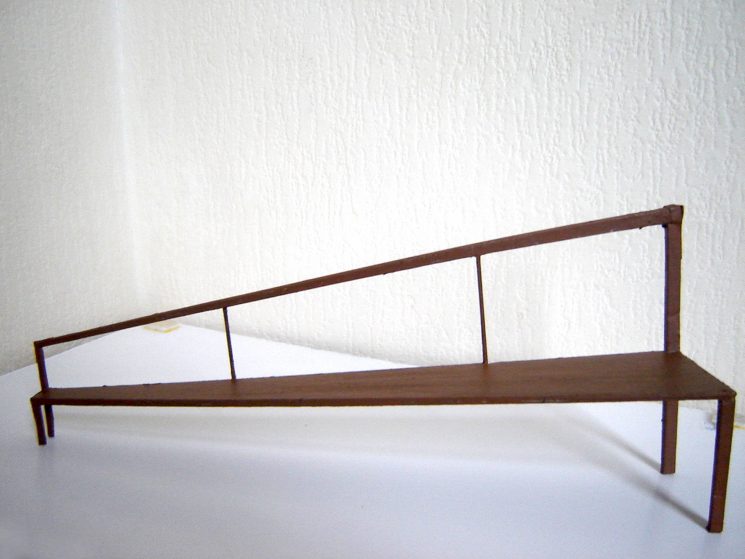 There is a lot to express once you step into Shorsh’s space at the Migration Museum. A wave of peace enveloped me while navigating the walls of his art studio. Discovering his precious art pieces gave me a sense of understanding of all the inspiring places an artist’s journey can take us to. And how important for all of us to be there, to listen with our hearts, to step out of our comfort zone, and to understand a wider picture. 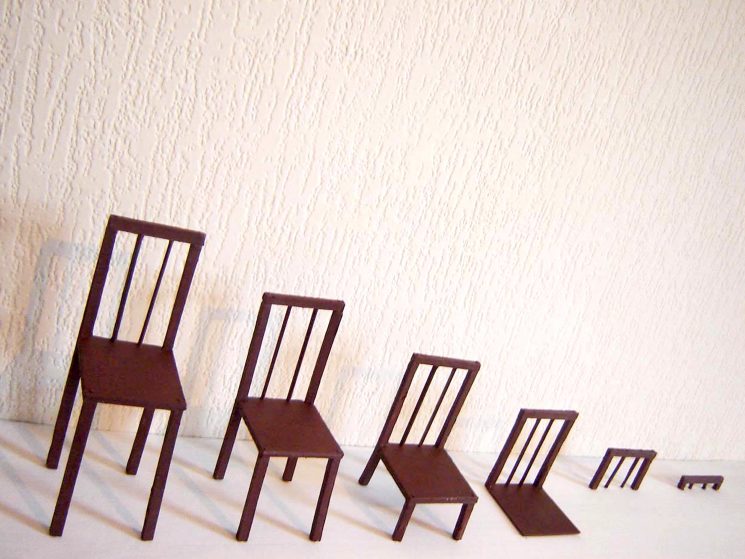 I was particularly touched by Waiting, a series of models for sculptures Shorsh sent in with his application to be the artist in residence in Room to Breathe, and which he later presented another version of in his art studio. Shorsh wrote that Waiting represents his experience of waiting eight years in the UK system for his application to be heard while “my life was on hold and I was unable to work or to travel”. I found this artwork very powerful because every one of us can connect with it in our own way. Any human who has crossed a border has experienced this state to a certain degree. But I believe Shorsh’s depiction of this experience takes it to a different level. You can read the work from left to right or from right to left. I read them as the chairs sinking into the ground, reflecting the person sitting on them who is waiting endlessly to start a new life. Later, when I spoke to Shorsh, I had a glimpse into when this artwork was created; as with most of his work, he was sketching them alongside his dreams without knowing whether he would be able to create them in full scale one day. I was touched by how an artist and his artwork share the same journey and are both ‘waiting’ to exist in full.

I am very humbled and inspired to have Shorsh with us at the Migration Museum; it’s a great chance for all of us to cross paths with him and discover his powerful work and journey. I believe all visitors will have a special experience uncovering how a remarkable artist like him kept his soul alive, kept his culture alive, and created beauty out of unimaginable conditions, and chose to generously share his knowledge and art with all of us.

AN: Ceyda, as the most recent artist in residence, and Belen as the final one, how do you connect with Shorsh’s work? What are your favourite works among those displayed in the art studio?

Ceyda Oskay: I found Shorsh’s wire ceramic piece The Border very powerful. Shorsh placed barbed wire on a ceramics tile, and allowed it to melt, transforming it into something beautiful and magical and yet also leaving a slightly haunting trace of what it was. The viewer is not told where the wire is from, and is left to wonder “Which boundary? Which border?” – and in this wondering the viewer is reminded of just how many boundaries exist in the world. 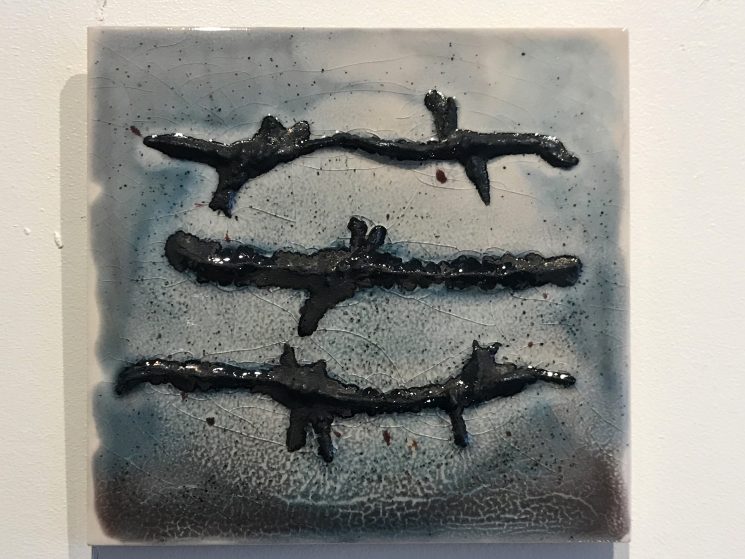 In transforming it into a tile, Shorsh alludes to multiples: perhaps many tiles will be made from this one, and form a different type of boundary, a wall. In multiplying, the object may also lose its power, becoming one of many lines.

Belén Y Yáñez: When I saw Aftermath for the first time, I found an immense ocean in front of my eyes, a colourful boat that drifts with an unknown destination, a little boy laid down in a new land. A visual metaphor of life itself.

I also discovered in Aftermath an invitation to get lost in the waters of the ocean, which seem to me a dark blue, almost black, colour … 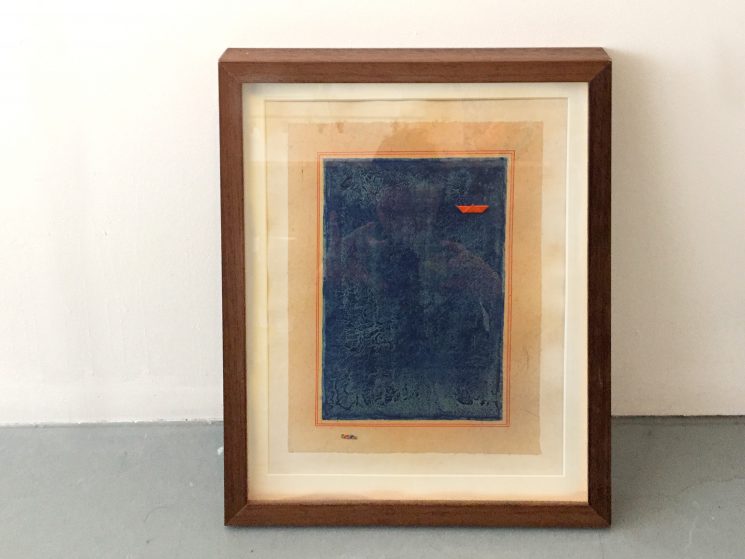 After some conversations, I realised that what was in front of my eyes was a faithful representation of a real story, the journey of Aylan, a three-year-old Syrian boy whose dead body was found washed up on a Turkish beach. Aylan was drowned, like thousands of others who were fleeing suffering in their homelands, attempting to reach an unknown land in which to rebuild their lives.

Aftermath is a mirror reflecting the story of too many refugees and migrants who die while trying to reach another opportunity. Aftermath is an alarm that has not stopped ringing since Europe began to experience what is called the ‘migratory crisis’. Aftermath is a shout that calls for a change in migration policies now.

Shorsh Saleh is artist in residence from 4–28 April 2019. Shorsh will be in his studio between 3pm and 5pm every Saturday during his residency, when you can stop by to chat with him, and design your own flying carpet. He is also running two flying carpet weaving workshops – on Sunday 14 April and Saturday 27 April (both are now sold out).

Assunta Nicolini, gallery supervisor, is curating further blogs about the next artists who are due to have a residency in the gallery.

Dima Karout is a visual artist and educator and is curator in residence of  the art studio inside Room to Breathe.