We are approaching the end of our third monthly residency in our current exhibition, Room to Breathe: the New Art Studio, an art therapy practice supporting asylum seekers and refugees in London, will be leaving the gallery on 24 February, and Ceyda Oskay will be moving into the space the following week.

In the course of their residency, the New Art Studio have transformed the space into a display gallery for previous and current artworks created by a diverse group of people, with different backgrounds and artistic interests. Visitors to the museum have the chance to meet the artists, see how they work and to participate in weekly workshops held by the New Art Studio. They will be holding a workshop for the next three Saturdays in February (9, 16 and 23) – to which everyone is of course welcome.

This blog explores the main aspects of art therapy practice through a series of questions and answers with the New Art Studio’s founders, Jon Martyn and Tania Kaczynski, and with Aditi Anand, curator at the Migration Museum.

Assunta Nicolini (AN): Art therapy among disadvantaged groups such as asylum seekers and refugees is recognised as a powerful tool to help overcome the trauma that exile and displacement cause. And being part of art therapy groups like the New Art Studio provides refugees and asylum seekers with the possibility of exhibiting their artworks and accessing a wider audience, one that is interested in migration as well as in the arts. Art therapy in the context of migration can be an extremely empowering process through which individuals can develop and sustain resilience. Jon and Tania, as current artists in residence at the Migration Museum, could you tell us about your experience of combining art therapy with a museum setting?

Jon Martyn and Tania Kaczynski, New Art Studio (NAS): We have found the workshops to be very inspiring. It was interesting to see the public’s responses to the paintings, and their engagement with the process of art making itself. There was a valid exchange between members of the studio and the general public. Many people have never met asylum seekers before and it enabled experiential learning, on both sides. 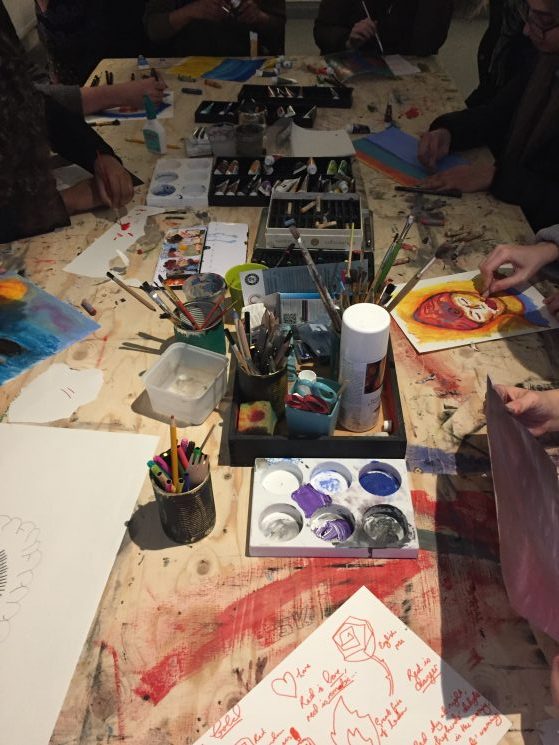 Students from the University of Roehampton, London, responding to the work created by the New Art Studio members during their visit with Dima Karout to the “Room to Breathe” art studio. © Dima Karout

AN: Art therapy is a relatively new interdisciplinary field. How do you see the intersection of psychotherapy and art in the context of migration?

NAS: Creativity is essential for asylum seekers: when all is lost, imagination is the only place of true freedom. The process of art making demystifies psychotherapy and destigmatises the asylum experiences. The need to make a mark is urgent when one’s life has been under threat. It is a way to confirm one’s existence.

AN: The artworks displayed in the ‘Room to Create’ at the Migration Museum have received considerable attention from visitors. How did your clients – those who are exhibiting in the gallery – react to this?

NAS: The members of the New Art Studio felt very proud to see their work in a public place and were impressed with the number of people who came to look at and respond to their artwork and stories. They are often unheard and unseen. 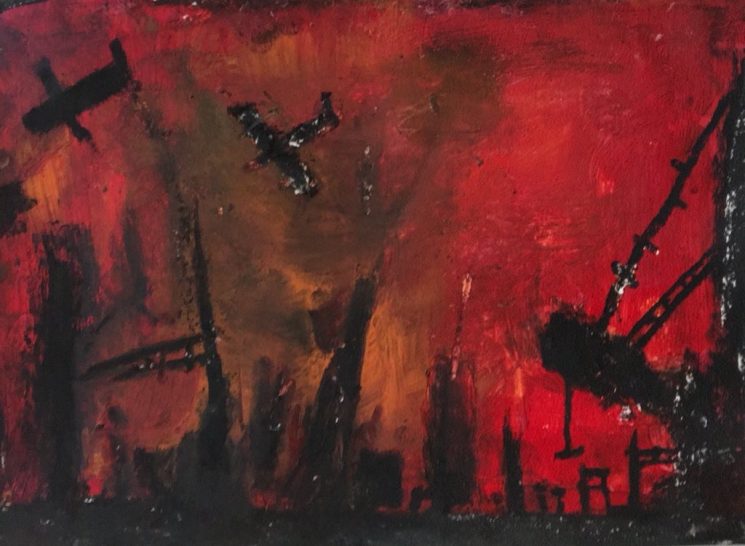 A war scene by Sayed

AN: In terms of the commercial viability of art produced by asylum seekers and refugees, what is the balance you strike between the risk of exploitation and empowering and supporting such artists?

NAS: One of the ways we avoid exploitation is by giving control to the members. That is, they select the work that they want to show, and they receive the funds if a work is sold. Powerful experiences create powerful, soulful authentic work, which is popular within the current art world.

The public responds well to seeing this work because the asylum experience is mostly misrepresented or not represented at all. The paintings work on a universal level, often addressing issues of loss, hope, and belonging. 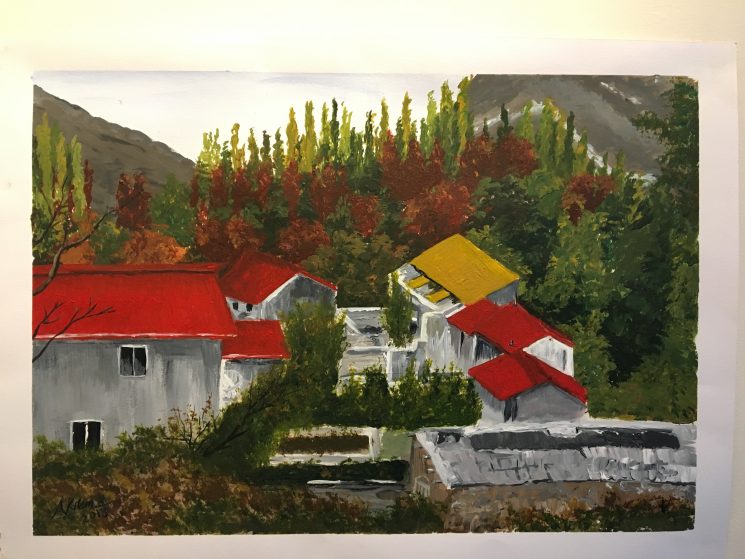 AN: Aditi, as co-curator of Room to Breathe, has the New Art Studio residency lived up to your expectations?

Aditi Anand (AA): My co-curator, Sue, and I were introduced to the New Art Studio more than a year ago. When we first visited their studio in Islington – where the group meets once a week – we immediately felt it was a special place. The walls were fully covered in artwork, the tables were strewn with art materials, and there was a real sense of warmth and community. It was clear to us after speaking with the studio members that making art was a really important part of their lives: people told us that, regardless of what was going on with the Home Office, work or family, they rarely missed their Monday studio time together.

When we invited the group to be artists-in-residence inside Room to Breathe, it was with the hope that it would be an opportunity for them to have even more time and space to make art and to share their work with the public. The group had complete freedom to turn the art studio inside the exhibition into their own space and use it as they wanted. We knew it would be challenging for some of the group members to move from the familiar, intimate space of their Islington studio to a very public museum setting, and that not everyone would feel comfortable doing so. But it has been really fantastic to see that several members have started to use the space as their studio and fill the walls with their work. Audiences have responded very strongly to the work, and the weekly art-making workshops led by Tania and Jon have been very popular. The studio has become a ‘room to create’ not only for the artists involved but also visitors to the museum. The New Art Studio residency has done just what we had hoped – connect people through the act of making art, without the need for a common language or culture. 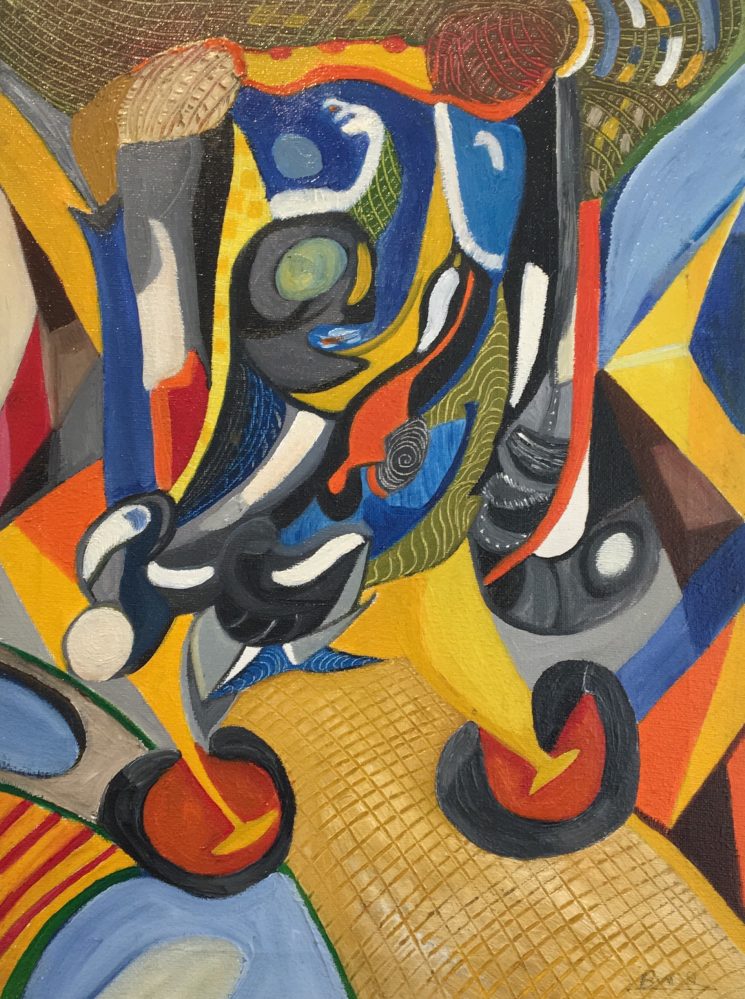 AN: Room to Breathe has a curatorial narrative strongly focused on the dimension of resilience in the arrival phase of migration. In your opinion, to what extent does art therapy contribute to the creation and development of resilience for migrants and refugees?

AA: Making art and being creative allows us to explore all the different facets of who we are as people, and not to be just defined by a single thing, such as our race, class, gender or immigration status. I think that’s what makes art therapy so powerful in helping people develop resilience – it allows us to connect with our emotions and who we are as individuals. Resilience is one of the themes within the exhibition, but it’s also important to recognise there are many times in our lives where we don’t feel particularly strong or resilient. In fact, it’s quite normal to feel that way, and art is one of the ways that we can channel and process our feelings of uncertainly or even despair. Being able to express ourselves without judgement is one of the most therapeutic aspects of making art.

The New Art Studio are in Room to Breathe until Sunday 24 February and will be holding workshops on the three Saturdays up to their departure (9, 16 and 23). Assunta Nicolini, gallery supervisor, is curating further blogs about the next three artists who are due to have a residency in the gallery (details are available on our exhibition page).