The New Londoners, an exhibition featuring portraits of families from all over the world who call London home, is on display in the Breathing Space café section of the Migration Museum until 27 May. This blog profiles the exhibition, which features the photographs of Magnum photographer Chris Steele-Perkins, a long-term supporter of the Migration Museum. It includes a ‘behind-the-scenes’ section written by Patrick Dowse, one of Chris’s photographic assistants, about the process of securing the photographs.

Within the UK there is nothing new about the perceived difference between London and the rest of the country – historically, there has always been resentment of the capital, for its wealth, its perceived low morals, its mix of people – but a recent survey of these differences showed the contrasts to sharp effect. One of the strange omissions from that survey, however, was the ethnic make-up of London in comparison with the rest of the country – strange, because London is known for its multi-ethnicity and is seen now to be probably the most ethnically diverse city in the world. 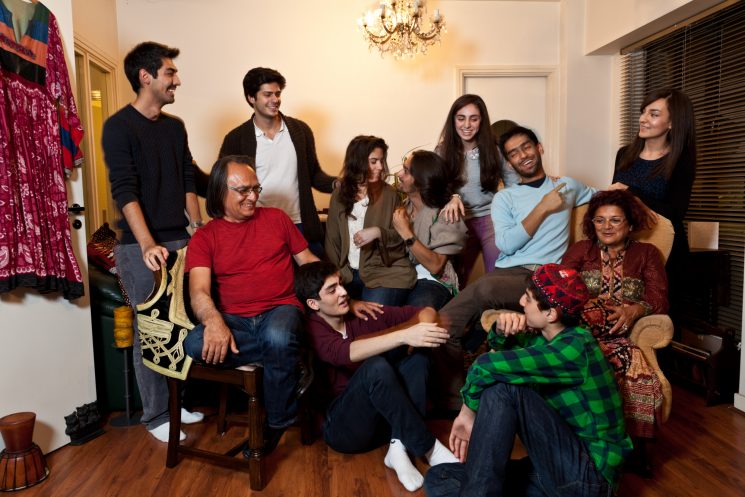 Haroon (left, seated) with his wife, Amina (right, seated), with their sons Milad and Manni (behind Haroon) and nephews Abdullah, Owain and Hamza. His niece Homaira (centre), with her son Imaan and daughter Negeen, and family friend Live (far right).

This multi-ethnicity lies at the heart of Chris Steele-Perkins’ The New Londoners project: ‘The whole world is here in London, and it is the most multi-cultural, most ethnic city in the world,’ he says. And, as a migrant himself and someone of mixed parentage (he was born in Myanmar when it was still called Burma, and identifies as half-Burmese), he was aware of the complexity of identity, both for individuals and for people constantly questioning individuals about it. ‘The question I still continue to be asked is “Where are you from?”,’ Chris says, ‘which has often got the subtext that you don’t really belong here.’ And yet, quiet evidently, people increasingly do feel they belong here, and one of the distinctive characteristics of the capital is the apparent ease with which cultures and ethnicities exist alongside each other. A new kind of identity seemed to be emerging, a new kind of Londoner, and Chris set out to document it, attempting to take photographs in London of people from all the 195 countries recognised by the United Nations (UN).

He set out to do so with a number of common principles: the photographs would all be taken in the subjects’ households; they would be of families, however they interpreted the meaning of family; they would be formal photos; and they would be accompanied by the transcript of an interview between Chris and the subjects of the photos. The result is The New Londoners, which exists as a website, as a photobook (published by Dewi Lewis and on sale in our bookshop) and as an exhibition, in the Migration Museum until 27 May and at the British Library until 7 July. The book, which documents 164 families (collectively hailing from 187 countries) was to be published on the day that the UK was due to leave Europe (Friday 29 March); its launch took place instead on Thursday 4 April at the Migration Museum. 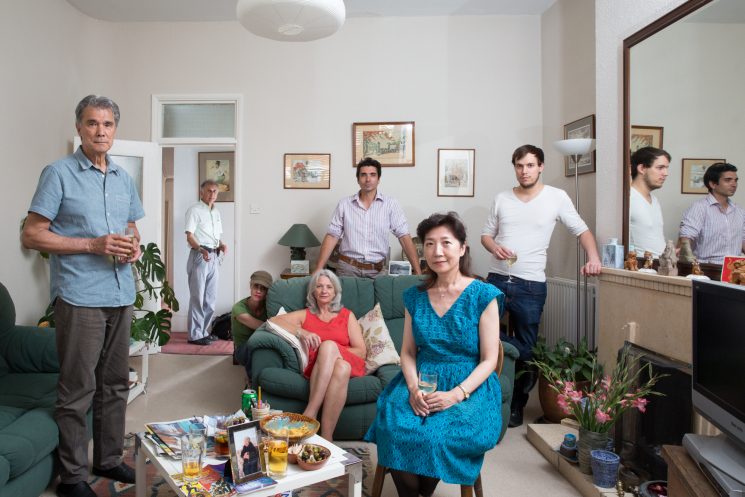 ‘My own family is a pretty decent fit for the family profile – with my wife [Miyako Yamada, foreground] being Japanese, my half-brother [Thein Mynt, left] half-Australian and me [in the door-frame] half-Burmese – so fairly early on I thought I would include myself, but built around my brother rather than me: I’m tucked away at the back. My mum’s in the picture as well, a small tiny framed print in the foreground.’ Also in the photo are Chris’s son, Cedric, by the mirror; Thein’s wife, Jean Miller, on the sofa; their son, Lewin, behind the sofa, and his partner, Francis, kneeling beside it.

Chris put feelers out through various contacts, but he was introduced to many of the people he photographed by subjects of earlier photographs, or he stumbled across them by chance, for example meeting a colleague of somebody from the Marshall Islands at a Magnum book-signing event. Some of the stories he heard from families, particularly those who had fled war, were harrowing: the matriarch of the Congolese family was tearful remembering the situation that led to her leaving her home country, the father of the Afghan family explained how the rise of militant Islamist rule meant his job as a satirical comedy writer was not only untenable but put his life in danger, and his wife spoke longingly of an era when women worked and wore skirts – painting a now unrecognisable picture in light of contemporary, conservative Afghanistan.

Having set himself the challenge of photographing people from every country in the world residing within the capital, Chris found that the concept of categorisation of countries presented some interesting questions. For one thing, some of the people he photographed identified themselves with countries – Kurdistan or Somaliland, for example – that have not been recognised by the UN. But there were other issues, too.

‘The idea had originally been to try to put together families from all the UN-recognised states, but I kind of gave that up as an idea because it seemed to be artificial,’ Chris explains. ‘I was intrigued to discover people from places like the Chagos Islands. They didn’t particularly want to be here. They hadn’t come of their own free will, as most migrants to Britain do. It’s a sad irony that they’re here, not because they’re trying to escape tyranny; it’s the opposite, they’re trying to get back to their homeland.’

Patrick Dowse, one of Chris’s assistants on The New Londoners, writes about his experience:

In the summer of 2015, as a bright-eyed and bushy-tailed student photographer, I found out that Chris Steele-Perkins was looking for an assistant for a project. I leapt at the rare opportunity to work with someone with such a rich photographic history.

Coming from a relatively small town in the North-East of England, London was a huge culture shock, which was partly why I had wanted to study in this city; to be part of a team working on this project with Chris only added to the excitement – and working on this project was a brilliant way-in to learning about and meeting people from a huge range of cultures and countries.

By the time I started working with Chris the project had been underway for over a year, but there were still about 160 countries left to cover – a lot of work still to do.

I worked alongside a team of other assistants and researchers, tracking down the remaining families, often contacting embassies, local community groups, blogs and online groups, such as Facebook groups set up for those living in London from different countries.

Social media such as Facebook were invaluable to me – I could use them to connect with those we had still yet to cover in the book: for example, I was able to contact someone from Tajikistan through a Facebook group set up to connect people from Tajikistan living in London and the UK.

We were welcomed into the homes of the families we photographed with open arms. As well as talking about that very British topic of the weather, we often had extensive conversations about their journey to the UK. And one thing I noticed was that, no matter which country we were photographing, no matter which part of the world they were from, we were always offered a cup of tea. That’s one thing that I noticed we all do in the UK when welcoming someone into our home.

Being given the rare chance to work on a project like this has taught us that we’re all the same as each other, no matter which country we’re from. Someone from every corner of the world has found London and now calls it their home. We all want the same thing: happiness, love and community. That’s all we’re after, whether we’re from the UK or Uganda, Venezuela or Vanuatu.

The impact on the project of the 2016 referendum

Chris began the project two years before Britain voted to leave the European Union in 2016. As the project widened, Chris came across people who had moved to London from all over the world for reasons as wide ranging as their countries of origins: work, study, love, curiosity. Some were asylum seekers and refugees, others students or people who had moved for their business. ‘These are the kind of ordinary, decent people who are getting by and doing stuff; [they represent] the exact opposite of the rhetoric that came out of the Leave campaigns,’ says Chris. ‘They are in all kinds of jobs, and in all kinds of work, and have all kinds of histories; not one of them strikes me as someone who’s just kind of sitting back and abusing benefits.’

Since that vote, many foreign nationals in the UK have spoken about a change in feeling, and now wonder what their futures hold, and whether they are still welcome. After the referendum, Chris says, there was a sense that people felt more vulnerable: most of the potential participants in the project who subsequently changed their minds about being involved did so in that ‘post-referendum era’.

Unlike the majority of England and Wales, London voted to remain part of the European Union in the 2016 referendum. Later in the summer of 2016 the newly elected mayor, Sadiq Khan, a British Muslim of Pakistani origin, launched the #LondonIsOpen campaign, proclaiming: ‘London is the best city in the world. We are entrepreneurial, international and outward looking. London is known as a city full of creativity, a place where anything is possible. The key ingredient of our city’s success has been the flow of brilliant ideas and talent from across the globe. Our city is comfortable in its diversity, proud of its history and optimistic about its future. London is open.’ 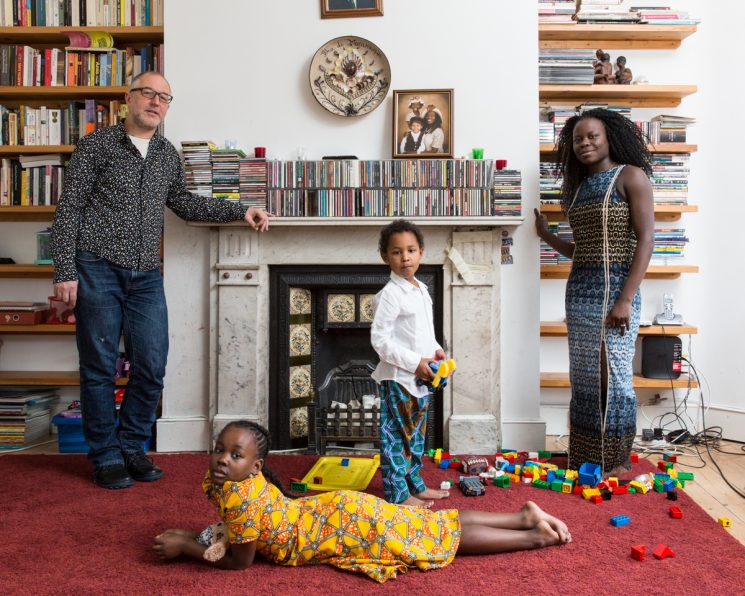 Gert Van de Meersch (left), from Belgium, with his wife, Atija Sulubito Puma (right), from Mozambique, with their daughter, Marcia, and son, Sander. Marcia was born in Mozambique and came to London when she was two.

‘All these things go against the rhetoric of the Brexiteers,’ says Steele-Perkins, who moved to the UK from Burma (now Myanmar) aged two. ‘I think it’s kind of pathetic sometimes, hearing this notion of British values and things like that, as if we’ve had some kind of static system, which is unchanged and suddenly it’s been threatened by people coming in. The whole history of this island has been people coming here due to wars, colonial movements, European movements and so on; what we’ve got now is a product of a process of continuous evolution, which will continue.’

At a time of renewed racism and xenophobia, Chris considers The New Londoners a historical document. That the British Library has taken it into its collection is significant for him, adding to ‘the sense of it belonging to the tradition of recording’ – recording what Chris feels is the ‘greatest political issue of our time: migration’.

The New Londoners exhibition is on in the Breathing Space café at the Migration Museum until Sunday 26 May and at the British Library until Sunday 7 July. From 12 June to 8 September, it will be on display at Somerset House, London, as part of the exhibition Kaleidoscope: Immigration and Modern Britain.

The photobook, The New Londoners, costs £35 and is published by Dewi Lewis and available in the Migration Museum’s bookshop.