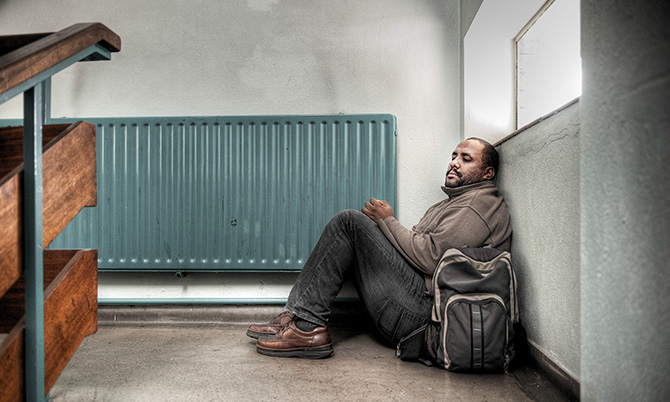 © Dharmendra Patel (Outroslide Photography), from the ‘Land of Hope and Glory’ project

Yasser was brought up in a rural district approximately 800km from Khartoum. He fled his country at the age of 28, after being imprisoned and tortured by the Sudanese State. When he was released he had no choice but to run; leaving his mother and younger sister behind, he went to Libya, from there, he managed to get to England. He had very little money and no contacts here. Growing up was hard and it wasn’t safe, ‘human rights are like the lottery in Sudan, some get it, some don’t’.

He settled in Birmingham, and was granted asylum in 2005. He loves the UK but even though he has asylum status he is scared to call on the authorities such as the police or the ambulance in case he is sent back to Sudan. Due to the nature of his arrival and stay, he now suffers from ill health. He hasn’t spoken to his family now for a few years even though they are alive and well.

I decided to take the picture the way I did because it shows how he was feeling. It made me realise how much I was taking life for granted. I am the same age as this man and his upbringing and mine were vastly different.