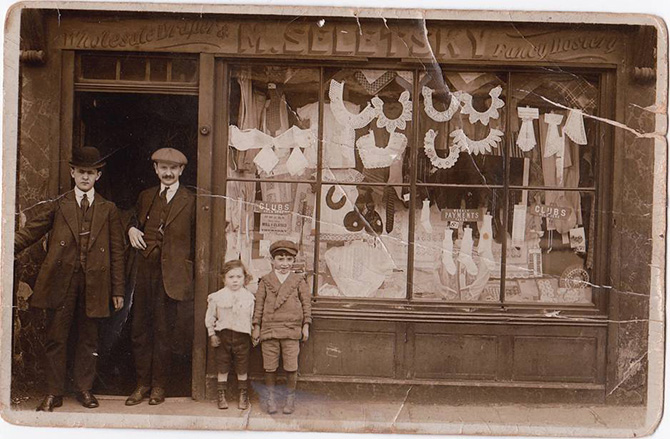 The central figure is my paternal grandfather, Max Seletsky, came to the UK from Gombin in Poland with my grandmother Sarah in about 1903. All the lace and crochet work in the window was made by her in the back room of their Bethnal Green haberdashery. She had started work in Poland at the age of eight in a sweatshop from which her older brother would carry her home asleep each day on his shoulders.

Sarah (a fine cook) lived into her 80s, Max (a gifted gardener) into his 90s. By the 1920s he had exchanged his haberdashery in Bethnal Green for a fish and chip shop in Nile Street, Hoxton, where my father had to spend two hours a night scraping scales off cod before he could do his homework. After the weekly street market, the kids would have gang fights using severed chicken heads as missiles. Max later returned to his trade as a tailor with his sons Lew (on the right in the picture), John and Robert (their generation of the family having adopted the surname Sedley) and eventually prospered in his clothing factory in Old Street. My father (aged 4 in the picture) became a solicitor and I followed in his legal footsteps. The young man on the left was a cousin named Shlomo.