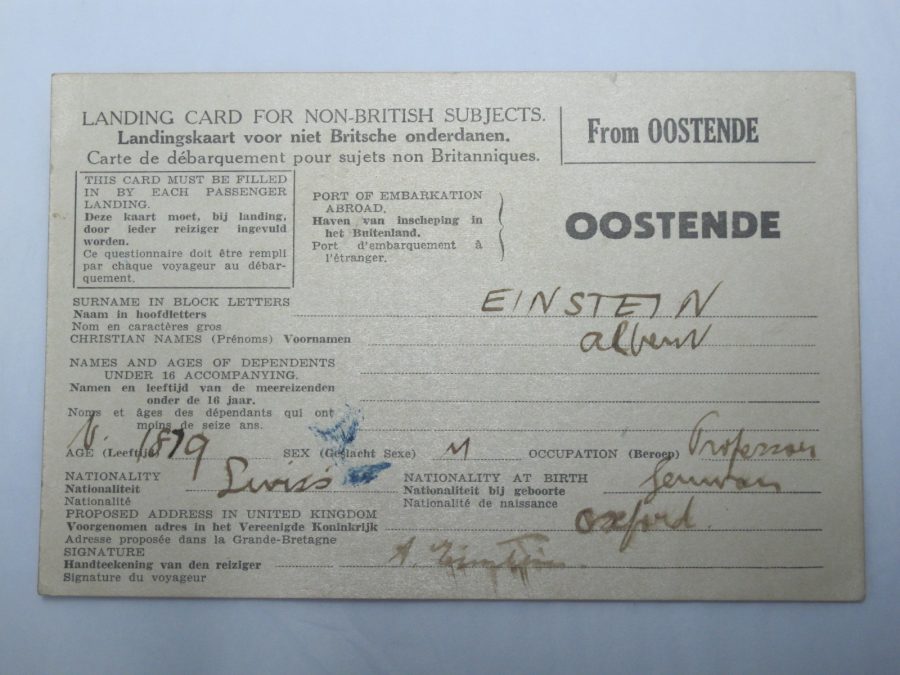 A landing card relating to Albert Einstein’s escape from Nazi Germany has been discovered and put on display for the first time at the UK Border Agency’s national museum in Liverpool.

The Jewish physicist fled from his homeland when Adolf Hitler came to power. A bounty was put on his head by the Nazis, who named him an enemy of the regime.

Landing cards were completed by all passengers arriving in Britain. Einstein’s card is proof of his journey from Ostende, Belgium, to Dover on 26 May 1933. On the reverse, he wrote that he was bound for Oxford.

After nearly 80 years stored at Heathrow Airport, the landing card was discovered by curators from the museum, which is called ‘Seized! The Border and Customs Uncovered’.

“We didn’t know this landing card ever existed until we visited UK Border Agency officers at Heathrow. We were keen on acquiring any documents relating to immigration, but were stunned to find paperwork relating to such a prominent historical figure as Albert Einstein.

“What’s remarkable is that the landing card bears his signature, has his profession as ‘professor’ and lists his nationality as Swiss. This shows how Einstein had renounced his German citizenship only weeks earlier in angry reaction to Nazi policies.

“This tiny piece of paper brings to life Einstein’s escape from the Nazis to England. This country became a safe haven for him until he eventually settled in the US.”

‘Seized! The Border and Customs Uncovered’ is located in Liverpool’s Merseyside Maritime Museum.