Connecting past and present 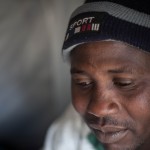 Last autumn, at a time when we were working with the National Maritime Museum on a residency exploring the theme of migration, the Museums Journal contacted us for our thoughts on the migration crisis for a piece that eventually appeared in its October edition.

Most museums plan their activity years in advance, so it can often be challenging for them to react when the focus of either their museum or their exhibition suddenly becomes front-page news. But the Migration Museum Project is a museum in search of a home and therefore able to react more nimbly than this. Our position is complicated, however, by the fact that we’re a heritage museum, with an ambition to tell the long story of migration into and out of this country; we are not a campaigning political organisation.

How then should we react to the stories of hundreds of thousands of people forced to leave their countries in search of safety and a better life? One of a series of photographs taken by Chris Barrett, who visited the migrant camp in Calais twice on behalf of the Migration Museum Project. © Chris Barrett

How we do this in the physical space we hope to inhabit in the not-too-distant future will doubtless give our curators and designers a long line of sleepless nights. In the interim, though, we have run a number of blogs that have clearly been influenced by the current migrant crisis, even if that hasn’t been their main focus. Our principle here, as elsewhere, has been that how we understand the past affects the way we behave in the present, and that we think differently about current crises – and act differently, too – when we see them as part of a general pattern of human movement into and out of countries in search of safety, stability and better prospects. But talk is talk, and we have also planned a programme of activities that focuses centrally on current migration developments. We are planning an exhibition in June – a momentous month that sees both the referendum and Refugee Week – exploring the complexity and human stories behind the current refugee ‘crisis’ with a particular focus on the refugee camp in Calais. The exhibition will take place in the Londonewcastle Project Space in Shoreditch, London, and will be an immersive storytelling experience with work across visual art, photography, film, sound and performance. A significant group of established and emerging artists, some refugees and migrants themselves, some even camp residents, will show their artistic response to the Calais camp. Anyone interested in working with us on this venture, or wanting to contribute funds to it, should get in touch with Sue McAlpine or Aditi Anand, who are curating our residency. We will keep you updated with developments, particularly in the area of funding, and give you full details of the dates and the programme of activities nearer the time.

The photographs featured on this post were taken by Chris Barrett in Calais. Chris’s photos, as well as those of many other photographers we have worked with, will be part of the display in June.