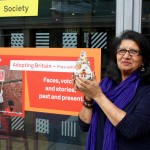 Things are super busy at Migration Museum Project – we can currently be found in several locations! Have a look below for a snapshot of our current exhibition locations and be sure to visit our Events page for full details of these and all associated events. Follow us on Twitter @MigrationUK and sign up to the mailing list to stay up to date with our activity.

Our first Keepsakes display and a huge selection of our 100 Images of Migration touring exhibition form part of Southbank Centre’s Adopting Britain exhibition, which they have curated in partnership with Counterpoints Arts and with contributions from a wonderful range of artists and organisations. Interactive, multi-media, and with lots of opportunity to contribute your personal stories and responses, this exhibition is not to be missed!

On until 6 September 2015. To make a day of it, check the Southbank Centre website to see all the great activity (much of it free) they have happening over summer.

Our flagship exhibition has found a simultaneous temporary home at Wardown Park Museum in Luton, where you can see this fascinating and moving selection of photographs up until 19 July 2015. Situated in a beautiful Victorian House within a landscaped park, around one and a half miles north from the centre of Luton, the Wardown Park Museum is a great place to explore Luton’s people and heritage, regiment history and its relationship with lace.

Visit Luton Culture to see what else is on offer at the museum while our exhibition is there – such as a Sikh Fortress Turban spotlight loan from the British Museum.

Germans in Britain at the University of Reading

The University of Reading is the latest host of Germans in Britain, an exhibition which explores the long and complex story of Anglo-German relations (there’s a lot more to it than war and football!) and the huge contribution of German migrants to Britain over the centuries. The Modern Languages and European Studies department at the University of Reading is hosting a number of associated talks to enable visitors to delve into particular themes and periods – all details can be found in our Events pages. On until 24 March 2017.

We are delighted to be working with the National Maritime Museum to engage visitors, school groups and community groups in their RE·THINK space, which until mid-November focuses on our favourite theme: migration! In addition to self-led and volunteer-led activities guiding you to explore, discover and reflect on and respond to migration-related questions and content, there will be a range of events and workshops in the space over the next 6 months. It all kicks off with Let Us In on Saturday 27 June – a powerful drama performance by the hugely talented A Level students of Corelli College. 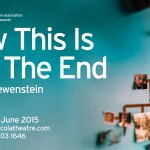 Now This Is Not The End play & Keepsakes post-show discussion

Six decades ago, Eva lived in Berlin. She remembers her house on Essener Straße. It used to have a blue door.

Now her granddaughter Rosie is making the city her home. But just as she begins to plan for her future, Eva’s oncoming dementia causes Rosie to question her family’s past.

As secrets unravel around her, what will Rosie discover? And what will be lost forever?

Now This Is Not The End is the story of three generations of women, two capital cities and one vital struggle to keep memories alive.

Developed at the Royal Court by one of our most exciting emerging playwrights, Rose Lewenstein’s poignant drama asks how the actions of our ancestors shape our future, how we come to have an identity of our own, and what – if anything – it means to have a homeland.

“They’re just stories. There’ll come a point when nobody can remember”

Audiences are invited to bring a family keepsake to the post-show discussion where curator Sue McAlpine will use the keepsakes to draw out a discussion about the history and effects of migration. Participants will be given the chance to question how objects embody memory and share the memories individuals’  objects hold. For inspiration for choosing a keepsake to bring, have a look at Sue’s blog and our Keepsakes gallery. 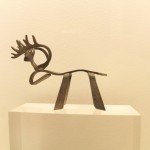 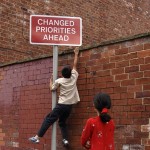 Adopting Britain: 70 Years of Migration launches on 17 April as part of the Southbank Centre’s Changing Britain festival. This interactive and accessible exhibition aims to highlight personal stories of migrants and refugees, celebrate the contribution of migrant groups to Britain’s artistic landscape and open up discussion around one of the most politically sensitive and pertinent topics of this year’s election. Keepsakes is a display of personal items that keep memories of migration and identity alive. Museum collections represent society’s decisions about what objects are valuable enough to hand down to future generations. But museum objects matter less to most people than the objects their parents and grandparents chose to pass on to them, and which they hand on to their own children and grandchildren.

Join us to explore the value of personal keepsakes in sharing migration stories. Do you have a Keepsake with a migration story? Tweet us @MigrationUK #Keepsakes.

Supported by the Paul Hamlyn Foundation. 100 Images of Migration is our flagship touring exhibition and is constantly moving, growing and adapting. It began life at our launch in 2011, the result of a competition we ran in the Guardian, and has since been adapted for Hackney Museum, Senate House, Leicester University, Leicester Train Station, BBC Radio East Midlands and the Heritage Gallery in Greenwich. A selection of our 100 Images form a constant thread through the 6 thematic sections of Adopting Britain.

For more information about 100 Images of Migration and to view the online gallery, please visit our Exhibitions page.

If you have an image which tells a story of migration, join our Flickr group to add it to our online gallery.