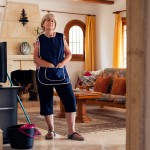 Our last blog looked at the huge exodus of British citizens in the immediate aftermath of the Second World War, when 2 million people left the UK to seek new lives in Canada, the USA, Australia and elsewhere. Emigration continues to be an important part of the migration story in Britain, and currently an estimated 5 million British citizens live abroad. That’s 7–8 per cent of the UK population. The European country with the largest British population is Spain, with an estimated 700,000 British emigrants.

Charlie Clift is a British portrait photographer living in London. He has dangled CEOs upside down, got shouted at by political leaders, waded up to his chest in floodwaters, smeared paint on art dealers’ faces and poured pints for dogs. All of it to make great photographs. He’s worked with the likes of The Sunday Times Magazine, The Independent, Samsung and AXA. His project Brits Abroad, featuring portraits of British emigrants living in Europe, was born out of a desire to change the current immigration debate in the UK by reminding people that Brits are immigrants, too. Simon owns a Caribbean themed bar on Fuengirola beachfront and enjoys the relaxed lifestyle of the area. He moved to Spain for medical reasons, because the warm climate helps alleviate his arthritis. © Charlie Clift

My interest in migration came from a frustration with the way migration into the UK was being talked about in the British media. Instead of viewing it as a human subject, it is often spoken about using statistics and stereotypes – when in fact every person’s journey to a new country is unique and personal. I wanted to show this to a British audience and couldn’t think of a better way to do this than to look at the lives of British people who had moved to live abroad. Every person I photographed lived a different life in Spain: some did live the stereotypical ‘retired and moved for sunshine’ type of lives, but many did not – from those who struggled to speak Spanish, and therefore to integrate, to those who had married Spaniards and brought up a family there. Each was a unique story.

Before setting off to Spain I started asking just about everyone I met if they knew a Brit who lived in Spain. This led me down a lot of interesting paths. Of course, once you start to find people in the area, they recommend others who may be interested in taking part in the project. I also thought of certain things which were really British and researched to see if they existed in Spain – for example, I found the Javier Bowls Club when I looked for the very British hobby of lawn bowls. Eventually – after many hours on Skype, on Google and talking to people – I found a wide group which I thought would show the diversity of the Brits in Spain.

For almost all of my sitters, moving abroad was the biggest change they have ever experienced in their life. It is not something people do lightly and is often something that defines them and which they feel is an important part of their character. I also found there was a unique ‘Britishness’ running through all the people I photographed, regardless of how much they had integrated into the Spanish way of life. I don’t think people lose their origins – it is part of who we are and will always be with us.

People often talk about migration into the UK and forget that Brits are immigrants too. I hope that by showing these people’s stories I will make people think twice about immigration into the UK, or at least see the discussion from a different viewpoint.

With a referendum about Britain’s membership of the EU on the way I thought there would be no better time to remind everyone in the UK just how many British people are living in Europe – so I am currently expanding the project to include many other EU countries. I’ve just got back from Denmark, Sweden and Estonia, and I hope to add four or five more countries in early 2016. By the end of the project I will have a body of work showing the massive variety of lifestyles that exist within Europe that I hope will help people see migration from a new angle. Francesca was born in Spain and is schooled in the Spanish education system; she is also a British citizen. She enjoys chocolate ice-lollies from the Iceland store that her mother occasionally visits to purchase British goods. © Charlie Clift Sean runs a traditional British fish and chip shop by the beach in Fuengirola. The majority of his customers are British holiday makers or expatriates and he serves chips made from imported British Maris Piper potatoes. © Charlie Clift Carole regularly plays bowls at the Javea Green Bowls Club, which consists almost entirely of British members. She loves living in Spain and doesn’t want to move but is frustrated that she can no longer vote in British parliamentary elections. © Charlie Clift Reggie works at an English language newspaper that her husband owns. She likes the Spanish pace of life but has not learnt to speak the language and thus struggles to integrate with locals. © Charlie Clift David Salgo is a musician who retired to Spain. He enjoys living in a typical Spanish village and plays golf regularly with friends, many of whom are also expatriates. © Charlie Clift David is a sculptor who works in his home in the mountains. He moved to Spain 46 years ago after learning to speak Spanish on a long motorcycle trip through South America. © Charlie Clift Paul runs an English language newspaper called The Courier from an office in Torrevieja. He moved to Spain to escape the busy life he had in London working for News International. © Charlie Clift Joyti lives and works in a community project in the desert named Sunseed Desert Technology. She enjoys living a sustainable life and move to Spain because it is where the project is based. © Charlie Clift Stacey runs a charity to care for and re-home unwanted dogs. Her house is full of donated goods to sell to raise money. In her spare time she plays darts in a local expatriate league and looks after her four cats. © Charlie Clift Linda works cleaning holiday villas to pay her bills and rent. She likes being able to have an outdoor life 8–9 months of the year but misses being able to watch her grandchildren grow up in England. © Charlie Clift

Charlie Clift’s photography may be viewed on his website – charliecliftphotography.com –where there is more information on his Brits Abroad project.