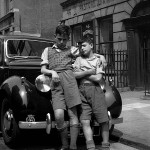 A weird coincidence occurs shortly after Colin O’Brien and I sit down for a coffee in Hackney PictureHouse, just across the road from where his photos formed part of the Migration Museum Museum’s first exhibition of 100 Images of Migration at Hackney Museum. A young man, George Nelson, sits down at our table and, spying the books Colin has laid out in front of us, apologises for intruding on our conversation – but he has to show us the image he has open on his phone. It’s the front cover of Colin’s book, Travellers’ Children in London Fields, which George (a photographer himself, it emerges) has just been recommending to a contact. There follows a conversation in which George expresses his admiration for Colin’s work, and Colin, generous and courteous as ever, asks questions about George’s work. Throughout it all, Colin seems completely unfazed by the coincidence or the praise, making no big deal about either. The cover photo for Colin’s “Travellers’ Children in London Fields”, 1987 – ‘I took many pictures over a period of three weeks and they took me into their confidence. It was only when I started to print the images that I realised what an amazing set of photographs they were.’

Making no big deal about it is not a bad way of summing up Colin’s approach to his work. He’s certainly made no big deal about it in terms of money, though he is entirely without bitterness on that account. ‘When I was starting out,’ he says, ‘there were two routes open to you if you wanted to make it big as a photographer. You could become a war photographer, as Don McCullin did, but I was too scared to do that; or you could do a David Bailey and become a celebrity photographer – but I just wasn’t interested in that world.’ In fact, Colin never became a photographer as such, not in the professional sense. All his photography was done in the margins of his working life, which was spent as a media resources technician for the ILEA and the GLC, and at the London College of Printing. For two hours or so every day, though, he would walk the streets with his camera, taking photographs of people who interested him. Cowboy and Girlfriend, Bolton, 1960 – ’Because I kept very bad records in the old days I thought that the picture had been taken in London, but a very nice lady wrote to me and told me that it was taken in Bolton. She named the very street, long since been demolished – she said Bolton was now a mess! It has probably been one of my most liked images.‘

He’s been taking photographs almost all his life. His Uncle Will gave him a box camera when Colin was eight years old (one of the photographs he took with this camera is in 100 Images: ‘Raymond Scallione and Joe Bacuzzi’, two boys posing with Italian magnificence on the bonnet of a black Ford in 1948), he had a Leica at the age of 14, has had more than 30 exhibitions in the course of his lifetime and is still – now well into his 70s – taking photos, both digital and film, and processing and printing his work in the traditional way in a darkroom. Hatton Garden, 1948 – ‘Raymond Scallione and his friend, Joe Bacuzzi, pose for me in this photograph taken when I was eight years old.’

In theory he’s retired but he has provided the photographs to more than 50 of the famous Spitalfields Life blog, he has just completed a new exhibition called London Life (beautifully recreated in a book published by Spitalfields Life and available on their site) and he has a new project lined up, on West End life, which he is undertaking with a young photographer, Alex Pink. You get the impression that Colin is not putting the lens cap back on his camera any day soon. Burgess Park Lake, Old Kent Road, 1984 – ‘I’d photographed these girls before. They sat on a bench beside this man who had been following them around and, when I raised my camera again, each of them pulled a funny face and poked their tongues out.’

Brief snippets of his life emerge in the course of our talk. Although he has no trace of an Irish accent (apparently one emerged somewhat unexpectedly, and to the great amusement of his friends, in the course of an interview on the Robert Elms radio show), he is proud to describe himself as of Irish extraction, his grandparents having moved to England from Ireland in the late 19th century. His childhood was spent in London during what he calls the ‘threadbare years’, the last years of the war and the half-decade that followed. His adolescence was mostly playing football in the park with an impressive roster of future writers (Bill Naughton, Frederic Raphael and Brian Glanville among them), and he celebrated narrowly missing out on national service by ‘bumming around’ in his 20s. He had the opportunity to photograph the Beatles before they were famous (he used to take photographs for Dick James, the music publisher who took over Northern Songs) but turned it down, because he was too busy – or maybe, I wonder, because he had a foretaste of their future fame, and wasn’t interested. And all the time he was doing what inspired him, the real job his 9 to 5 job allowed him the time and space to do (when he wasn’t studying for a degree and a masters): taking pictures on the streets of London, capturing the passing scene of an ever-changing city. It’s clearly not the money that motivates him. Most of his exhibitions and publications he has paid for himself. And he’s not, as we’ve seen, interested in fame. His photography is an act of kinship similar to his involvement in community projects and campaigns such as the fight to save the Marquis of Lansdowne or the attempt to prevent the development of Norton Folgate. Something similar motivates him to continue taking his camera out on the street – an insatiable curiosity for, and an empathetic engagement in, other people’s lives. I’m guessing here, because this grandiose kind of phrase isn’t likely to be what Colin would say. His account would be something along the lines of ‘I just like people’, and maybe it is just that. Certainly there appears to be no distance, literally and metaphorically, between Colin and his subjects: his photos are imbued with a rare warmth and generosity. Wandsworth, 1973 – ‘These boys knew how to make good use of old pram wheels!’

Ah yes, that generosity. The books he’s brought with him are for me – an act of unassuming kindness on his part that touches me deeply. When I am flicking through the books later, making notes for this blog and trying to work out why his images have such emotional heft, it is this I come back to: his generosity, his engagement in other people’s lives, his sense that nothing divides us – we are all in this together. Junction of Clerkenwell Road and Farringdon Road, 11 June 1962 – ‘I read later that a child died in this accident. There was a rumour that the traffic lights malfunctioned, and all turned green at the same time.’

Colin O’Brien’s photos can be viewed on his website, colinobrien.co.uk. His latest book, London Life, is published by Spitalfields Life Books and is available from all good bookstores and on the Spitalfields Life site.