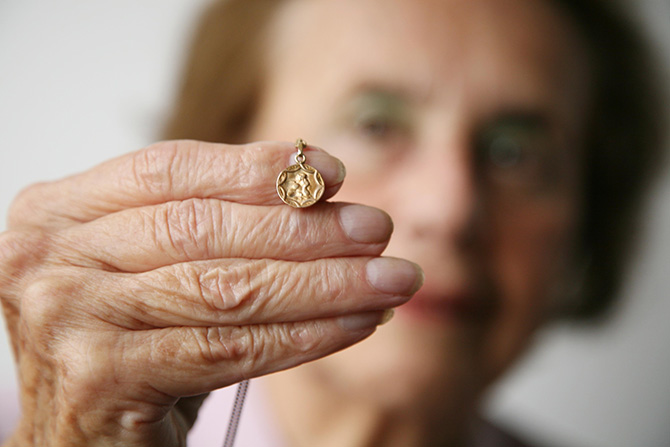 When Lily was a young child in Hungary, her mother gave her this small gold pendant.

In July 1944, when Lily was 14 the Nazis deported her from her town of Bonyhad with her mother, brother and three sisters. They were taken by train to Auschwitz. The small pendant went with them hidden inside the heel of her mother’s shoe. As they arrived at the camp her mother asked Lily to swap shoes with her. She never saw her again.

The guards ordered valuables to be handed over but her pendant stayed in the heel of her shoe. When the shoes wore out she placed the pendant in her daily ration of bread. After about four months in Auschwitz, the sisters were transferred to an ammunition factory near Leipzig. The pendant went with them.

Allied forces liberated Leipzig in 1945 and the sisters sought refuge in Switzerland. Lily tried to rebuild her life. She wore the pendant every day in memory of her murdered family. In 1967 she came to London with her husband and three children.

Lily still wears the gold pendant and shares its remarkable story with all those who have time to listen. Any gold arriving in Auschwitz was stolen by the Nazis so Lily believes that her pendant is unique, the only gold to enter and leave the camp with its rightful owner. Like Lily herself, it survived against the odds.