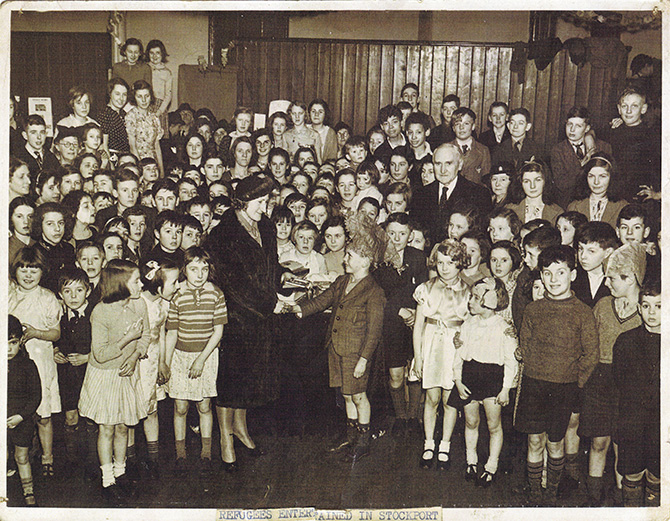 In 2008 I discovered that 17,000 Guernsey evacuees had fled to England, just before the Nazis occupied the Channel Islands. Most were sent to the industrial towns of northern England, and several thousand arrived in my home town of Stockport, Cheshire. They had to adjust to the unfamiliar landscape of industrial England and make new lives for themselves for five years until their island was liberated. Amongst the 17,000 evacuees were 5,000 school children who were evacuated with their teachers.

This photograph depicts some of the children who attended an ‘evacuee party’ organised by Stockport Council and the WRVS. A newspaper report of the time stated “The party was organised for 140 children, most of whom were from the Channel Islands. These evacuees, mostly aged 3 to 7, were greeted by the Mayor of Stockport, and the Mayoress presented gifts and toys to the children. They played games and competitions, then had tea in the Unitarian Schoolroom which consisted of a liberal array of sandwiches, jellies and cakes.”

Guernsey was liberated on 9 May 1945 and although thousands of evacuees returned home over the coming months, many chose to remain in the English towns which had welcomed them during the war.