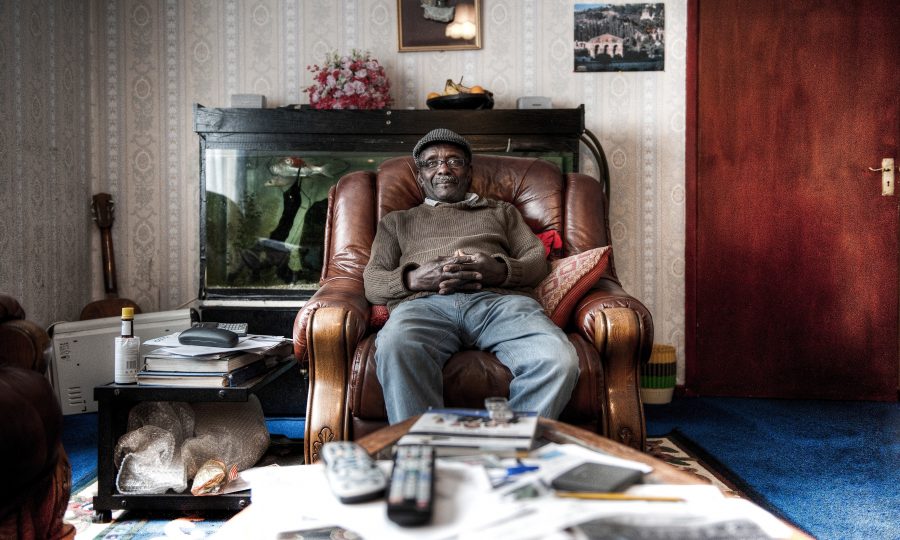 © Dharmendra Patel (Outroslide Photography), from the ‘Land of Hope and Glory’ project

Pastor Reynolds was born in 1929 and came to England on 15 March 1960; it was a Tuesday morning. It was difficult leaving his family and friends, the people he’d know and trusted all his life, now he was heading off to a new land, a land of opportunity and promises. Uncertainty got the better of him and he spent his last few moments in Jamaica contemplating what he was going to leave behind, he looked back and saw the tears of loved ones through his own. This was the first time in his life he had travelled out of his country. When he landed, the cold hit him and he spent the first few days battling homesickness. Here he was in a new land, a land he’d only ever read about, alone and without company. As with many new immigrants he faced racism and the reality of his imagination.

Pastor Reynolds soon found work and for the next 12 years worked on the railways of Birmingham, until he was made redundant. It didn’t take him long to get back on his feet and for the following 8 years he worked for a large engineering company, although history was about to repeat itself. This time he made the decision to start his own business, painting and decorating. How did he become a Pastor? He’d heard about a Pentecostal church in London, which they then decided to replicate in Birmingham, he worked there as a Deacon for a number of years before becoming a Pastor.

The image was taken at the Pastor’s home in Birmingham. I decided to take the picture there because it was a reflection of his personality; relaxed and easy-going. He’s long since retired and now spends a lot of his time at the church and watching his children and grandchildren grow up.